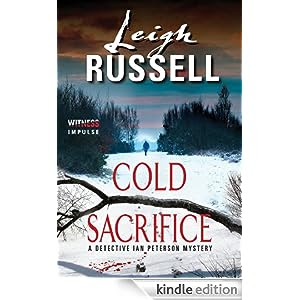 The first book in a series of atmospheric, psychological thrillers featuring Detective Ian Peterson, as he solves deadly crimes in the UK.


When three dead bodies are discovered in Detective Ian Peterson’s hometown of Kent, it becomes clear that a vicious killer is on the loose. And without his trusted colleague, Detective Geraldine Steel, by his side Ian’s left to take the lead on a complex murder case with few clues.
The first victim is a middle-aged woman named Martha brutally stabbed to death in the local park. Her husband, who does not report her missing, is the prime suspect until a young prostitute, Della, reveals his whereabouts the night Martha was murdered. But then she is strangled to death in her apartment. While the police are frantically gathering evidence and looking for a connection, a second prostitute is suffocated.
With nothing but the timing of the murders to tie the three women to each other, Ian and his new partner, Polly Mortimer, struggle to make sense of the case and find the elusive killer before he strikes again. But, by the time Ian realizes the truth, it may be too late to save Polly.


LEIGH RUSSELL is the award-winning author of the Geraldine Steel and Ian Peterson mysteries. She is an English teacher who lives in the UK with her family.

I am delighted that Leigh Russell has written a guest post on my blog today
I read Cold Sacrifice last year and you can read my thoughts here. What I have learned since I started writing.

Over the six years since my debut, Cut Short, was first published, I have learned about many things. As a result of my research I now know a little about rigor mortis, DNA, police procedure, poisons, and fatal knife wounds, to name just a few areas.

The internet is a fantastic resource, but I prefer to conduct my research with real people whenever possible. So you will find acknowledgements in my books to many people who have helped me, including a Professor of Forensic Medicine, a Human Remains expert at the British Museum, and a Consultant Forensic Psychotherapist at Broadmoor, to name a few. Everyone has been really helpful, and I have learned a lot. The research is fascinating!

Yet in the course of my writing career, I have learned more than information. I have also learned about how to survive the challenges faced by an author.

To survive as a bestselling author requires nerves of steel, and a hide like a rhinoceros. There have been many thrills  along the way - major awards, great reviews, many bestseller lists (including Number 1 overall on kindle in the UK) and invitations to appear at literary festivals around the world. In addition to the many public accolades, fans frequently email me via my website. It is wonderful to read their messages.

But there are lows as well, days when no one seems to like my books, an event I was looking forward to is cancelled, I discover someone appears to be plagiarising my books, and I'm losing the tussle to make a plot work. So life as a bestselling author is a roller coaster ride. You need to be tough to survive!

Finally, I've learned something about how to write. It's impossible to convey in a few words what I've learned about the craft of writing, although I am keen to encourage other writers. I run occasional courses for The Society of Authors in London, and for The Writers Lab in Greece and on the Isle of Wight, and recently I've agreed to informally mentor a young aspiring writer who approached me through the Crime Writers Association.

Eugene Ionesco said: 'A writer never has a vacation. For a writer life consists of writing or thinking about writing'. Once you are hooked on writing, you may well find it becomes, in William McIlvanney's words, 'an inexplicable compulsion'. So my Top Tip for new writers would be to make sure you enjoy what you are writing. Because once you get hooked on writing, you are likely to devote a lot of time to it.


You can read more about Cold Sacrifice and Leigh's other books at her website: leighrussell.co.uk/