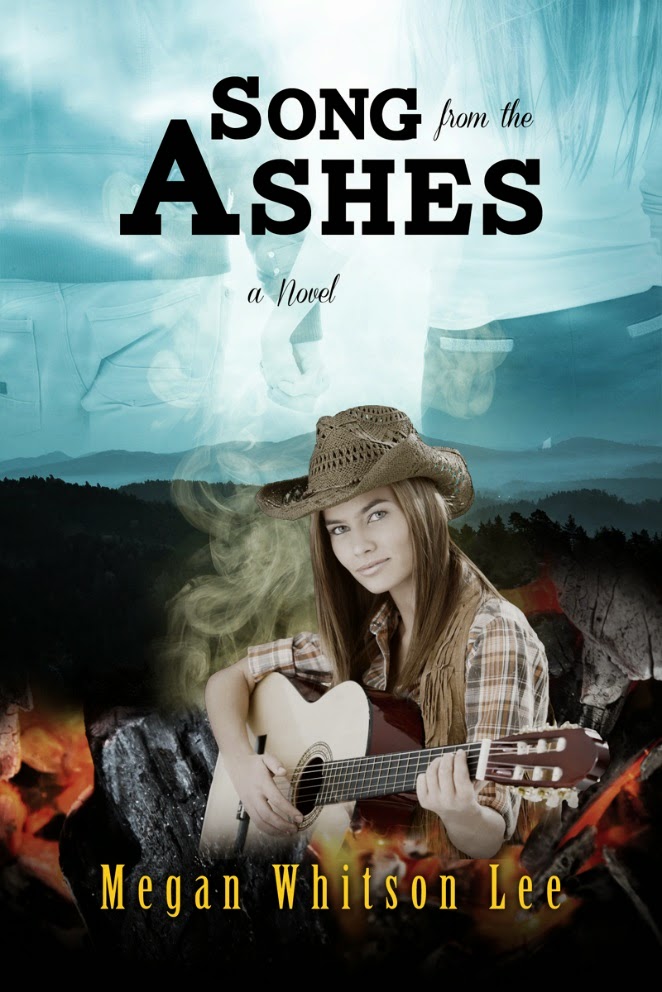 Attorney Landon Kingsley craves order and normalcy, and aside from his well-hidden vice of smoking, he lives the life that everyone expects from him in his hometown of Kingsport, Tennessee. Recently engaged to beautiful nursing student, April May, Landon’s new fiancée is everything he could want in a wife. She is devoted to her faith and family and truly loves April’s cousin, Ella Casey, has returned to Kingsport after ten years of pursuing a career as a country music singer in Nashville. Ella’s failed career and affair with a married music producer scandalizes her in the eyes of the town, but her legal troubles drive her to Landon for help. Landon finds himself increasingly attracted to Ella and more discontent than ever with the path he has chosenfor his life. Amid a firestorm of family and town gossip, Landon is tormented by his past and the complicated decision of whether to listen to God’s voice or follow his own desires.

SONG FROM THE ASHES, a modern retelling of the classic Edith Wharton novel The Age of Innocence, explores the dilemma between the pursuit of dreams and personal happiness versus contentment in God’s plan for marriage and love.

The snow was already forming crusts on the unsalted parts of the road that January
evening. The weathermen had talked of a dusting, or perhaps even showers, but
the severity of the precipitation was wholly unexpected. It was only a high school
event—a talent show held at the local civic center. Even so, Landon Kingsley was
upset with himself and his late arrival. Landon always made a point of being on
time, but tonight he had lingered over the reading of a brief. At least that was
how he rationalized it. In all honestly, he hadn’t wanted to stub out his cigarette
prematurely. He always enjoyed a smoke when his mind was preoccupied.
Landon knew his girlfriend and her parents would be waiting for him. He
slipped into the rear of the auditorium and scanned the mass of people for April and
her family. She had texted that they were sitting near the front, and he cringed
thinking that would make his entrance all the more embarrassing—everyone would
see him entering late.
April’s two younger sisters were both in high school, and although he had not
heard them sing, Landon understood they were talented. In fact, April’s Aunt Julia
informed him that the entire family possessed great musical talent.
“On her daddy’s side of the family, everyone tends toward musical talent in piano
and guitar. On her mama’s side, nearly everyone has beautiful singing voices—
especially that Ella—she’s out in Nashville right now, you know. She’s been out there
for years singing country music. I guess she does all right.”
Landon had never met Ella, but he had heard about her, and he understood that
through some circumstance or other she would actually be attending the talent
show that night.

As he made his way down the sloping aisle, he saw familiar faces—many of
them flashing him a smile and a wave. In a town of this size, people knew each other
or at least knew of one another. Part of the tri-cities area in Northeastern Tennessee
consisting of Kingsport, Johnson City and Bristol, Kingsport was the second largest of
the three—a town of around fifty-thousand that had grown a little over the years
but was no booming metropolis either. It retained a small-town feel, a place where
people still smiled and greeted one another on the streets. A town where people
spent their whole lives. Retirees from up north settled down there, and people who
had lived there most or all of their lives called it home and heaven. The downside
was that gossip spread like wildfire, and no one was ever free from the scrutiny of
folks who wanted what you had or who didn’t think you had enough.

Mid way down the rows of seats, Landon glimpsed the face of Dora Feldman. He had
represented her husband last year when he was sued for a property line dispute.

A little further down, he saw the scowling face of Dawson McMurphy, who had

years ago. Landon couldn’t even remember the specifics of the case now, but Mr.

McMurphy had never allowed him to forget the outcome of it. Landon and his client

had won—Mr. McMurphy had lost and exhibited sour grapes ever since.

Sitting at the end of the third row, craning her neck to see him and then

waving wildly was the lovely, smiling face of April. She looked relieved when she saw

him and rasped in a stage whisper as he fell into the seat beside her, “I was worried

He shook his head, returning the whisper. “I got caught up with some

business.” It was mostly true.

Her forehead and nose wrinkled simultaneously. “Have you been smoking?”

Desiring to avoid another half-lie, Landon simply smiled and patted her leg. “I

haven’t missed your sisters have I?”

April shook her head. “No, but you almost did! They’re up next.”

tune, “Stairway to Heaven.” He couldn’t believe teenagers in this day and age knew

and still appreciated the tune. The boy on the stage fumbled his way through an

acoustic version of the song, interspersing his performance with “oops!” and “I’m

sorry” and “I didn’t mean to do that.” Finally, the boy’s misery was over and the

Landon cast a glance down the aisle to the left of him. April’s mom sat beside

her daughter, and she smiled at him sweetly. It had only been this week that Mrs.

May had said to him shyly, “I know it’s not really my place,” her Tennessee accent

drawing out the vowel of plaay-ce, “but I just want you to know that April has so

enjoyed the last few months ya’ll have been dating.”

Landon had been contemplating asking April to marry him, but not before he was

absolutely certain of her answer. He was quite a bit older than her--thirty-seven

years to her twenty-five—and his past was much more checkered. April had taken

married. He wished he could come to her in the same state, but his life had taken

him other places and there had been many women. Therefore, he was concerned his

past might have scared her away, and he said as much to her mother.

To this confession, Alissa May sweetly patted his hand and told him if he and April

ended up together, the family would be only too happy to welcome him as one of

them. “April’s father and I are ten years apart, and things have turned out good for

us. And I know April is not nearly as concerned with your past as she is with the man

you are right now.”

Landon looked over and smiled at the lovely dark-haired girl beside him. Beyond

her he could see April’s father—a man of few words—quiet, but infinitely wise and

well-read. Charles May had worked for Eastman Chemical Company his entire life.

which had given him wealth and allowed him to approach his retirement with ease.

over the past three months while he had been dating April, but then he noticed the

new face at the end of the aisle. She, too, locked eyes with him and waved a stilted

“That’s my cousin Ella,” April told him. “She’s just come into town from

She’s visiting with your family?”

“Well, sort of. It’s a long story. But basically, things haven’t worked out so

well for her in Nashville. Mama told me she’s back in Kingsport to stay for now.”

“I see.” Landon thought Ella looked the part of the country singer. She was

dressed in jeans and a suede jacket, but he couldn’t help his eyes being drawn to the

top she wore underneath and all it revealed. Ella’s brown hair was highlighted with

blond streaks and fell in soft waves over her shoulders. From the reflection of the

stage lights, she looked like she had clear blue eyes and a straight, white smile. She

reminded him a little of a country star he couldn’t put a name to at that moment. He

could sort of see a family resemblance in the profile. Both April and Ella had straight

sloping noses that turned up at the tip. They possessed strong chins and adequate

cheek-bones, but the overall effect of their appearance wasn’t much alike.

“Oh, here they go!” April said, redirecting his attention to her young sisters

appearing on the stage. The oldest one held an acoustic guitar and the other stood

close beside her. It seemed to take the two girls a long time to begin. One was still

fiddling with the tuners on the guitar, and the other one giggled nervously beside

During this tense interval, Landon considered the possibility of proposing to April.

It was early on, he knew, but it was certainly not unheard of. She had, at the

commencement of their friendship, conveyed to him that she felt ready to marry and

start a family. April had graduated with a bachelor’s degree from the University of

Tennessee in some generic discipline that he couldn’t remember, but now she was

pursuing a nursing degree at East Tennessee State University, having decided that

she really wanted to be in the medical field.

Landon found it attractive that his future wife should have some sort of profession.

him. His own mother had a talent for gardening and writing, and for years she wrote

articles for the magazine Gardens of America. Occasionally she had traveled, giving

seminars on landscaping, gardening and planting, and dispensing advice on what

kinds of flowers grew well in what types of soil, etc.

interested him, but one couldn’t have everything. And he assumed that it was this

kinds, but especially old seventies music and country; he also enjoyed wine and the

occasional cigar or cigarette. Maybe April didn’t share these interests, but she was a

wonderful and stunningly beautiful Christian girl who wanted marriage, a home, and

a family, and at the end of the day, that was all that mattered.

Megan Whitson Lee grew up in Tennessee but moved to the Washington, D.C. area as a teenager. She worked for criminal attorneys before earning her master’s degree from George Mason University’s MFA Program in Creative Writing. Previously she received a Bachelor of Arts in Music followed by a year-long residence in London where she worked as a Literary Assistant. Her self-published first novel All That is Right and Holy won second place in the 2009 Christian Choice Book Awards. Megan teaches high school English in Fairfax County, Virginia where she lives with her husband and two greyhounds.