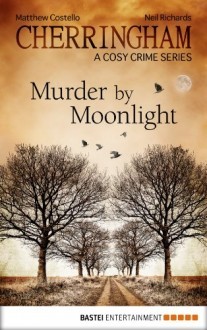 My Thoughts on the third cosy mystery in the Cherringham series .......


Just two weeks to go before the Cherringham Charity Christmas Concert. Choir rehearsals are in full swing. Then the worst thing happens: Kirsty Kimball, one of the singers, is found dead from a severe allergic reaction to one of the home-made rehearsal cakes. Jack is pulled in to help bolster the depleted choir - and soon he's convinced that Kirsty's death was no accident. Sarah agrees, and quickly the two of them are immersed in the jealousies, rivalries and passions of Cherringham's Rotary Club choir ...

Here we are again in the small town of Cherringham meeting up with Jack and Sarah, this time getting involved in the mysterious murder of gift shop owner Kirsty in the midst of preparations for the annual Christmas concert. Everyone at the choir knew of her allergy but who would want her dead, and now everyone of them was a suspect as Jack goes undercover and joins their number.

Between Sarah's flirty conversations with one of the suspects, Jack's no-nonsense approach with another, they begin to discover plenty of secrets among the choir members.

I really enjoy following how this unlikely partnership carry out their investigations, they are both so different but it all comes together nicely and neatly in the end.

The plots are not complicated, they're clever, and short, and the authors pack a whole lot of storyline into this series.

In this story, though, I didn't feel that I got to know Jack and Sarah any more than in the other two stories, the emphasis was on the other characters, which I enjoyed, but I hope that in the next mystery "Thick as Thieves" we learn a little more about them.

If you haven't read any of them I would recommend them highly, if you like your crimes cosy then check them out.  Here are my reviews in order:

Cherringham:  Mystery at the Manor

Also check out this brilliant guest post that the authors recently gave to Carole's Book Corner.  It's a fascinating insight to the series beginnings.