SPOTLIGHT AND GIVEAWAY: TOO QUIET IN BROOKLYN BY SUSAN RUSSO ANDERSON 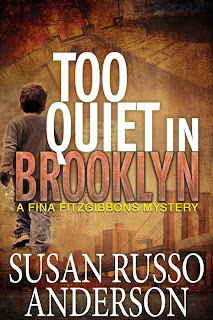 Too Quiet In Brooklyn (A Fina Fitzgibbons Brooklyn Mystery Book 1)

A Murder, A Child Missing, & A Young Woman Determined To Find The Truth …
Something weird’s happening. It’s too quiet, at least for Brooklyn, so twenty-two-year-old Fina Fitzgibbons is not surprised when she stumbles upon a throttled woman in the heart of Brooklyn Heights and discovers that the dead woman’s four-year-old grandson is also missing. She begins a wild hunt for the strangler-kidnapper, Ralph. During the chase, she resists falling in love with her boyfriend, Denny, an NYPD patrol officer, steps on the toes of Detective First Grade Jane Templeton, and uncovers secrets about her own past. In the end, Ralph has a deadly surprise for Fina.

About This Author
Susan Russo Anderson is a writer, a mother, a member of Sisters in Crime, a graduate of Marquette University. She’s taught language arts and creative writing, worked for a publisher, an airline, an opera company. Like Faulkner’s Dilsey, she’s seen the best and the worst, the first and the last. Through it all, and to understand it somewhat, she writes. Too Quiet in Brooklyn, the first book in the Fina Fitzgibbons Brooklyn mystery series, published December 2013. The second book in the series, Missing Brandy, about a missing teen, published September 2014, and Whiskey’s Gone, about the abduction of a single mom, completes a trilogy. The working title of the fourth is Dead in Brooklyn.

Giveaway
The author is kindly giving away a copy of Too Quiet in Brooklyn for Kindle
All you need to do is leave a comment below, together with your email address, and I will pick a winner on Sunday 31 May Midnight GMT
Open Worldwide
Good Luck!