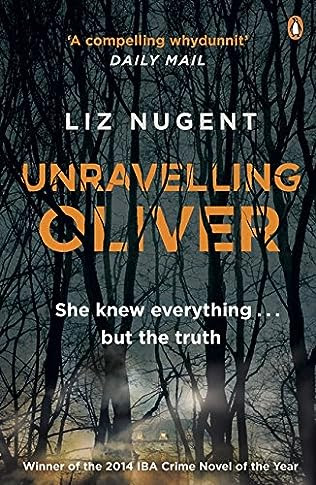 My Thoughts on this intelligent and unsettling thriller ....


Alice and Oliver Ryan seem blessed, both in their happy marriage and in their successful working partnership.  Their shared life is one of enviable privilege and ease.  Enviable until, one evening after supper, Oliver attacks Alice and beats her into a coma.

Afterwards, as everyone tries to make sense of his astonishing act of savagery, Oliver tells his story.  So do those whose paths he has crossed over five decades.

It turns out that there is more to Oliver than Alice ever saw.  But only he knows what he has done to get the life to which he felt entitled.  And even he is in for a shock when his past catches up with him.

Award-winning writer of radio and television drama Liz Nugent's debut novel is a clever and page-turning story of why someone would suddenly change their behaviour in one terrible moment.

After Oliver's violent attack on his wife Alice, his life is seen from a different person's perspective, all people who have met Oliver from his early years to today, all stunned by his savage act.  We learn that he's selfish, controlling, a womaniser, unfaithful, but also a handsome and charismatic charmer.

But it's Oliver's story that makes for the most chilling reading.

We slowly build up a picture of Oliver, from his lonely school days in Ireland and his bitter and strained relationship with his father, an eventful summer on a French vineyard, to his successful career as a children's writer....all of which lead to the ultimate long-kept secrets.

This was a book that I couldn't put down, the writing was assured and compelling, never a sentence wasted, a very clever and dark look at how people can deceive and manipulate, all skilfully told.  I loved it!


Thanks to Catherine Ryan Howard at Penguin for sending me a copy in exchange for an honest review.

Available to buy from Amazon UK  -  Amazon US  -  Book Depository

Liz Nugent has spent the last 20 years working in Irish film, theatre and television.  For the last decade, she has been an award-winning writer of radio and television drama and has written short stories for children and adults.