Book Review: THE DEVIL IN THE MARSHALSEA BY ANTONIA HODGSON 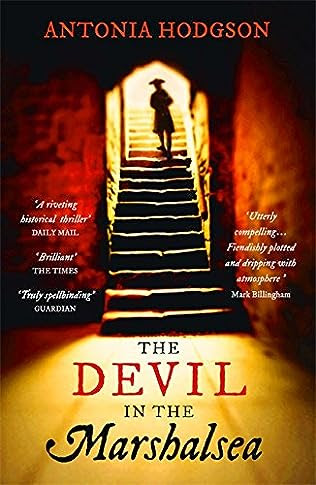 THE DEVIL IN THE MARSHALSEA
BY
ANTONIA HODGSON


London, 1727 - and Tom Hawkins is in trouble.  The wayward son of a country parson, his taste for wine, women and cards has led him in irons to the notorious Marsahalsea debtors' prison.

The Marshalsea is a dark and dangerous place at the best of times.  But when an inmate is brutally murdered, the prison is soon gripped by fear and suspicion.  Worst of all, Tom is sharing a cell with the prime suspect ......

Now he must risk everything to uncover the truth - or be the next to die.


We headed towards the yard doors, sunlight glinting up ahead.  Deep grooves ran down towards the yard where the carriages had rattled through, bringing in food and drink.  And taking out the bodies.  The ancient stone floor had been worn smooth by centuries of debtors trudging wearily through the gate.  And now here I was to join them - just one in an endless line of wretched souls stretching on and on for ever, to the end of days.

Here are my likes and dislikes about this novel

I read quite a long way into the book before I started to get really immersed in the story.  I didn't rush to pick it up and carry on reading. It took me at least a week to start enjoying it.

There were so many characters introduced, especially when Tom arrived at the Marshalsea, that I struggled to remember them all or what they were doing there.

The descriptions of the prison were very detailed, I could imagine the awful conditions of the Common Side a raggle-taggle of ancient timber houses slumped, exhausted, against the far south wall ..... 300 souls crammed 30, 40, 50 to a cell all night, stifled and starving, forced to breathe in each other's filth.
The author has obviously does plenty of research into this terrible place.

I loved the curious assortment of prisoners such as Mrs Bradshaw at the coffeehouse who comes and goes as she pleases as long as she's back for lock-up, Trim the barber, and the evil Samuel Fleet who everyone is terrified of.

What I really liked

The storyteller, Tom Hawkins.  A bright and likeable young man, enjoys a gamble and a drink or two, overall a good person who can't stand back and let thing happen, he has to act, no matter the consequences to himself.

The story was compelling, once I'd got more involved, there were shocks and twists aplenty.  Very clever. Very enjoyable. A very impressive debut novel and one that I would highly recommend if you're looking for a dark, atmospheric historical mystery with just a touch of romance.

Lots of potential for future adventures for Thomas Hawkins, in fact I am thrilled to have the second book to read - The Last Confession of Thomas Hawkins