Book Review and Giveaway: CHEF MAURICE AND THE WRATH OF GRAPES BY J.A LANG Blog Tour 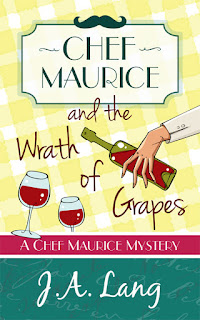 My Thoughts on this culinary cozy mystery ......

An invitation to dinner at the home of renowned wine collector Sir William Burton-Trent soon finds Chef Maurice in the middle of an all-too-real murder mystery party, when Sir William is found dead in his own wine cellar.
The guests are acting all innocent, but which one is only playing the part? The pushy Californian film director? The seductive French winemaker?
Or could it be, against all narrative decency, the butler who did it?
With the help of food critic friend Arthur Wordington-Smythe, a large kipper sandwich, and the newly formed Cochon Rouge Wine Appreciation Society, Chef Maurice must get to the bottom of matters before events turn decidedly sour...

"If you were to describe body shapes via the medium of vegetables, Chef Maurice would be an extra large turnip"

I think it's fair to say that Chef Maurice loves his food!

This is the second in the Chef Maurice series, I haven't read the first but I think this can be read as a stand alone novel.

This was an enjoyable and quirky cozy mystery, full of possible suspects in an old English country house where the owner was found murdered in his own locked wine cellar.

I also liked the touch of romance with one of Chef Maurice's kitchen staff, and his 'sort of' girlfriend, the local PC Lucy.

I think this is the sort of fun cozy series that will be very popular with anyone who loves British mysteries that don't take themselves too seriously.

Looking forward to the next! 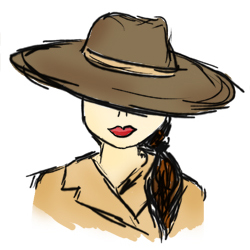 J.A. Lang is a British mystery writer, and author of the Chef Maurice Mysteries series.
She lives in Oxford, England, with her husband, an excessive number of cookbooks, and a sourdough starter named Bob.
Author Links
J.A. Lang’s Website
J.A. Lang on Goodreads
J.A. Lang on Facebook

To win your very own signed copy of Chef Maurice and the Wrath of Grapes and a cool looking mug click on the picture below, where you'll be taken to the author's website
Open to US and UK residents over 18 only
Giveaway ends on 30 July 2015 at 11.59 PM GMT 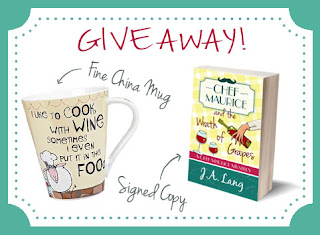