GAMES WITH THE DEAD BY JAMES NALLY - Blog Tour Extract 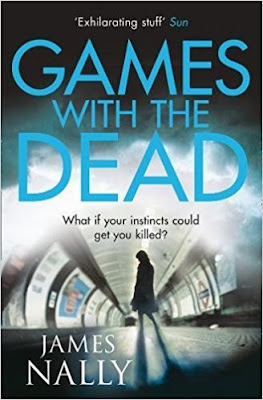 Life is about to get complicated for DC Donal Lynch.

When a young woman is kidnapped, Donal is brought in to deliver the ransom money. But the tightly-planned drop off goes wrong, Julie Draper is discovered dead, and Donal finds his job on the line – a scapegoat for the officers in charge.

But when Donal is delivered a cryptic message in the night, he learns that Julie was killed long before the botched rescue mission. As he digs further into the murder in a bid to clear his own name, dark revelations make one thing certain: the police are chasing the wrong man, and the killer has far more blood on his hands than they could even imagine.

A gripping, brutal and addictive thriller, perfect for fans of Ian Rankin and James Oswald 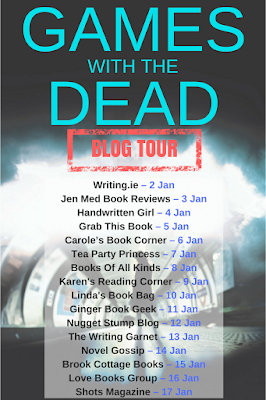 
On wall by painted cross find wood tray.
Do not move tray, sensor attached.
Place money bag on tray.
If buzzer does not sound leave money there.
Remove Stop sign in front of car and go.


He’s watching me. I know it. And he’s killed before. Seven years ago, he kidnapped and murdered Suzy Fairclough. What’s another life sentence to him? I’m totally dispensable.


I remember Crossley’s request that I pick up anything on the trail that may prove evidential. Good little soldier to the end, I remove the cardboard bearing the instructions, take it to the car and read the contents aloud twice, hoping against all common sense that they can hear me.


They can’t fucking hear me! He’s selected this spot for that very reason. And I’m not hanging around for five minutes to confirm it; not with 175 thousand in hard cash! He might lose patience and whack me.


I grab the money bag, walk over to a four-foot wall. Above a white painted cross, a wooden tray sits on a bed of sand. About 30 feet below, I can make out some sort of lane, maybe a disused rail line. A few feet to my right, an oblong metal box must be somehow connected to the tray’s sensor.


Somehow, I’ve got to lower this hefty bag of cash onto the tray without tripping the alarm. Face screwed into a tense ball of dread, I lift the bag and lower it slowly, painstakingly, ion-by-quivering-ion onto the tray. It sits, rests, no alarm.


I wonder why I’m standing here and turn to leave. As I remove the Stop sign from the middle of the lane, the tray scrapes the side of the bridge on its way down, courtesy of his improvised pulley system. He’s below, collecting his winnings.


I’m just yards away from the most wanted man in Britain.


Fuck it, I think. I‘ve got to do something.

James Nally was a journalist for 15 years, before leaving to become a producer and director of TV and film. This is his first novel, and is based on his experiences of his years writing about the murder victims of London.