LOOK FOR HER BY EMILY WINSLOW - Book Review 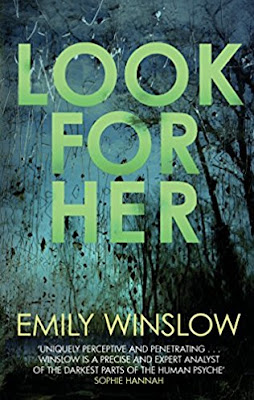 LOOK FOR HER
BY
EMILY WINSLOW

The memory of Annalise Wood has haunted the town of Lilling near Cambridge for decades. She went missing in 1976 and although her body was later found, the investigation went cold with no one held responsible. The grief and speculation surrounding her disappearance are engrained in the community.

Forty years on, another young woman stokes her obsession with Annalise, believing that sharing a name with the dead girl has forged a bond between them. When DNA evidence linked to the Annalise Wood murder comes to light, detectives Keene and Frohmann re-examine the case, picking apart previous assumptions and finding sinister connections to a recent drowning.

With her trademark skill in weaving together multiple perspectives and voices, Emily Winslow paints a complex and compelling portrait of a cold case that is far from dead and buried.............

Look For Her is the 4th in the Keene and Frohmann crime series, though I didn't realise that when I started the book.  There are mentions of past events, especially the most recent, but I could be immersed in the story without having to know exactly what happened back then.

The novel weaves together multiple perspectives of all the different characters - each chapter was narrated separately - so you get a good overall feel for the story which I think worked really well.  Sometimes I had to double check who was talking but mainly I had no problems with it.

The story takes a different turn to the one I was expecting, it was quite complex and very clever, as the detectives try to solve the cold case, interspersed with a University Counsellor who's sessions with two people add another dimension to the story.

This is a really gripping mystery, it's a puzzle, it kept me guessing and wondering right to the end.  It had good characterisation with a high standard of writing, and I thought the author was very skilful in giving us shocks and twists, none of which I saw coming!

A very satisfying and enjoyable read which I highly recommend.

Thank you to the publishers, Allison and Busby, for giving me the opportunity to read this novel in exchange for an honest review.

Emily Winslow is an American living in Cambridge, and her books are set here and surrounding areas. She trained as an actress at Carnegie Mellon’s elite drama conservatory, which inspired her use of multiple first-person narrators, and her years designing puzzles for magazines inform her playful, complex plot structures. She lives in an award-winning architectural wonder and she and her husband homeschool their two sons.
Follow her on Twitter: @emilycwinslow
Author's Website: www.emilywinslow.com