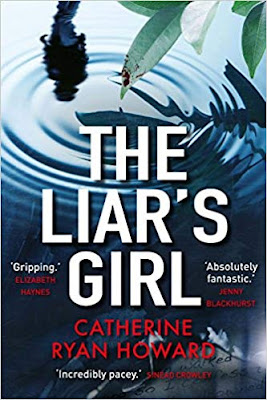 Her first love confessed to five murders. But the truth was so much worse.Dublin's notorious Canal Killer, Will Hurley, is ten years into his life sentence when the body of a young woman is fished out of the Grand Canal. Though detectives suspect they are dealing with a copycat, they turn to Will for help. He claims he has the information the police need, but will only give it to one person - the girl he was dating when he committed his horrific crimes.Alison Smith has spent the last decade abroad, putting her shattered life in Ireland far behind her. But when she gets a request from Dublin imploring her to help prevent another senseless murder, she is pulled back to face the past - and the man - she's worked so hard to forget.

The Liar's Girl is one of the best psychological thrillers I've read, it had questions, puzzles, twists, red herrings, a slow burner of a romance, in fact everything I would hope for and enjoy in a mystery.

Told in two time frames entitled Alison Then and Alison Now, starting from when Alison was first offered a place at St John's College with her best friend Liz and where she first meets Will, the story goes back and forth between the two to build up a picture of what happened during that time.

After the murders a decade ago Alison couldn't stay in Dublin and she went to live and work in the Netherlands where she's made a home for herself and she's pushed thoughts of Will down inside her, until the police turn up on her doorstep asking her to see Will, the Canal Killer.

I really got a sense of how vulnerable Alison was feeling as the media discover she's in Dublin and what she's doing there.

The story was swift and gripping and I found myself being swept along and savouring every line, as Alison tries to make sense of what Will is telling her, while another Canal Killer is at large.

Catherine Ryan Howard's suspenseful writing kept me glued to the pages and I kept changing my mind as I wondered whether Will really was innocent of those murders all those years ago or was he just a good liar.  Excellent writing and believable characters.


Thank you to Jellybooks for giving me the opportunity to read this novel.

Available to buy from
Amazon.co.uk