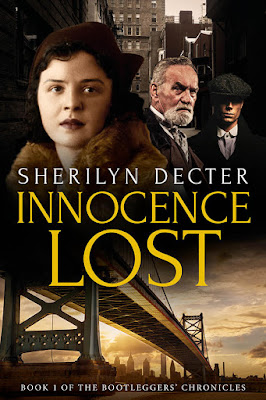 When you mention the Roaring 20s you can’t help but think of Prohibition and the mystery surrounding it. Today, lets step back in time and see how a widow copes with criminal elements and comes to rely on a ghost from the past.

Author Sherilyn Decter is visiting today to share her latest release, INNOCENCE LOST, the first installment in her Bootleggers’ Chronicles. She also has a fun giveaway she’s hosting for the tour. Be sure to check it out at the end of the post.

In a city of bootleggers and crime, one woman must rely on a long-dead lawman to hunt down justice…
Philadelphia, 1924. Maggie Barnes doesn't have much left. After the death of her husband, she finds herself all alone to care for her young son and look after their rundown house. As if that weren't bad enough, Prohibition has turned her neighborhood into a bootlegger's playground. To keep the shoddy roof over their heads, she has no choice but to take on boarders with criminal ties…
When her son's friend disappears, Maggie suspects the worst. And local politicians and police don't seem to have any interest in an investigation. With a child's life on the line, Maggie takes the case and risks angering the enemy living right under her nose…
Maggie's one advantage may be her oldest tenant: the ghost of a Victorian-era cop. With his help, can she find justice in a lawless city?

Innocence Lost is the first novel in the Bootleggers' Chronicles, a series of historical fiction tales. If you like headstrong heroines, Prohibition-era criminal underworlds, and a touch of the paranormal, then you'll love Sherilyn Decter’s gripping tale.

The second book in the series, TASTING THE APPLE, is available to pre-order.

For those unfamiliar with the author, here’s a bit of background on her.

The Roaring Twenties and Prohibition were a fantasy land, coming right after the horrors and social upheaval of World War I. Even a century later, it all seems so exotic. 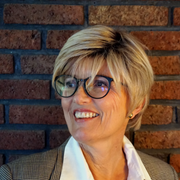 Women got the vote, started working outside the home, and (horrors!) smoked and drank in public places. They even went on unchaperoned dates (gasp)! Corsets were thrown into the back of the closets, and shoes were discovered to be an addictive fashion accessory after hemlines started to rise. And thanks to Prohibition, suddenly it was fashionable to break the law. The music was made in America- ragtime, delta blues, and of course jazz. Cocktails were created to hide the taste of the bathtub gin. Flappers were dancing, beads and fringes flying. Fedoras were tipped. And everyone was riding around in automobiles (aka struggle buggies and I leave it to your imagination why- wink.)

Bootleggers’ Chronicles grew out of that fascination. Writing as Sherilyn Decter, I will eventually have a series of historical crime fiction novels dealing with the bootleggers, gangsters, flappers, and general lawlessness that defined Prohibition. The Bootlegger blog rose out of all the research that I’ve been doing about this incredible era.

Growing up on the prairies and living next to the ocean, I am a creature of endless horizons. Writing allows me to discover what’s just over the next one. My husband and I have three amazing daughters, a spoiled grandson, and two bad dogs.

Sherilyn Decter is enthralled with the flashing flappers and dangerous bootleggers from the Roaring Twenties and Prohibition. Through meticulous research, that lawless era is brought to life. Living in a century-old house, maybe the creaking pipes whisper stories in her ear.

To get the inside skinny on the Bootlegger’s Chronicles, you can reach Sherilyn at the following links:

GIVEAWAY
Author Sherilyn Decter is giving away two autographed paperback copies of INNOCENCE LOST. Each of the books comes with a couple of sheets of flapper paper dolls. Click on the Rafflecopter widget below and follow the instruction to enter. If you can’t see the widget, just click HERE.

Thanks for stopping by today. Be sure to comment on the post and enter to win your copy of this tantalizing tale.