Spotlight on Land of Last Chances by Joan Cohen

Today I am featuring a new book by author Joan Cohen and I have an exclusive and dramatic extract from Land of Last Chances ...... it sounds like quite a fascinating novel 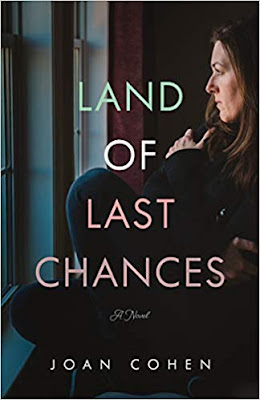 When Jeanne Bridgeton, an unmarried executive in her 40s, discovers that her expected menopause is an unexpected pregnancy, she realizes her risk-management skills don’t extend to her private life. She’s not sure who the father is, and worse yet, a family secret uncovered reveals she may carry a rare gene for early-onset Alzheimer’s disease. With no time left for genetic tests, she must cope with her intense fear of risk and wrestle with a daunting question: Should her own needs prevail or her child’s?

Jeanne pulled into a parking space opposite her office building,
turned off the motor, and peered at her face in the rearview
mirror. It was irrational to think her pregnancy could show in
her eyes, although the purple shadows beneath them testified
to her poor night’s sleep. Other than those, the usual Jeanne
looked back at her. She would be at her desk soon, immersing
herself in her work and grateful to be dealing with quandaries
strictly business related.
Suddenly, face out of focus, her eyes sought the reflected
action in the background. “No!” she yelled, whipping her head
around, but her voice had no effect on the blue Toyota Camry
smashing through the lobby entrance. The thunderous crash
shattered plate glass and bent steel. She raced for the door
that was no longer there.
The car had made it almost to the reception desk and was
surrounded by giant shards. The white-haired driver in the
front seat didn’t move, and she imagined his face mirroring
the front of the building, which looked like a gaping mouth with
its teeth punched in. She steadied herself against the brick
exterior and reached for her cell to call 911. Eduardo, the
jockey-tiny Cuban who manned their reception desk, had
flattened himself against the lobby’s rear wall. He genuflected
and slid down to the floor. From behind the couch, CEO Jake
Tyler rose, wild-eyed and ashen as the rising plaster dust. 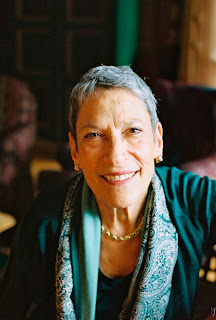 Originally from Mount Vernon, New York, Joan Cohen received her BA from Cornell University and her MBA from New York University.
She pursued a career in sales and marketing at computer hardware and software companies until she retired to return to school for an MFA in Writing from Vermont College of Fine Arts.


She has been a Massachusetts resident for many years, first living in Newton, where she raised her family, and later in Wayland. She now resides in Stockbridge, in the Berkshires, with her husband and golden retriever. 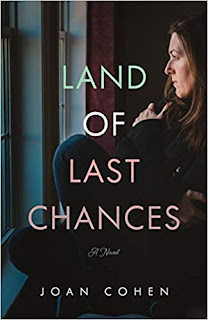