Book Review: To The Heart Of The Nile by Pat Shipman 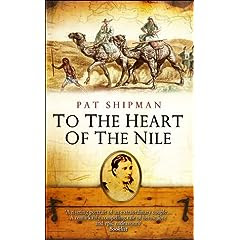 The nubile girls would be sold in January 1859.

They say that truth is stranger than fiction and this novel of the amazing life of Florence Baker is truly unbelievable.

Barbara Maria Szasz (the future Florence Baker) was born in Transylvania in 1845. At the age of 4 her mother and brothers were murdered by soldiers during the Hungarian Revolution. She then fled with her nursemaid, walking miles, to a refugee camp in the Ottoman Empire. When her nursemaid disappears Florence is kidnapped and taken to a harem where she is raised until the age of 14 when she would be sold at auction to the highest bidder in 1859.

By chance, a Englishman named Sam Baker is at the auction out of curiosity, he is instantly smitten with Florence but is outbid. He bribes the guard and they flee.

Most of the book is concerned with their first expedition and of the many problems they encountered, including mutiny, surviving serious illness many times, of hostile tribesmen, malnutrition, danger at almost every turn, sandstorms, unreliable porters and the torrential rain!

Sam shot and killed a crocodile as

crocodile stew was one of the crew's favourite meals, though Sam and Florence found ....... it was not to their liking. "Of all the rank stinking flesh I ever saw," Sam complained as he tried to chew the rubbery meat, "crocodile stands first. The flavour is between that of musky fish and the perspiration of a dirty person."

This is one of the most fascinating life stories I've ever read. I wondered why I had never heard of these explorers before, why hadn't I learned about them in school? Florence's bravery and determination as she stayed by Sam's side are an absolute inspiration. Sheik Achmet of Wat el Negur described her as 'having a heart stronger than a man's and is afraid of nothing'. Sam thought she had the heart of a lion.

Throughout it all Florence and Sam had forged an unbreakable bond that would last a lifetime.

Pat Shipman's novel was very compelling though some of the attention to detail I did find a bit boring. But at no time did I consider not finishing it as I was always eager to learn more of this extraordinary couple.

This is a book about romance, danger, exploration into uncharted territory, Victorian double-standards, the African slave trade, that I would not hesitate to recommend.

TITLE: TO THE HEART OF THE NILE
AUTHOR: PAT SHIPMAN