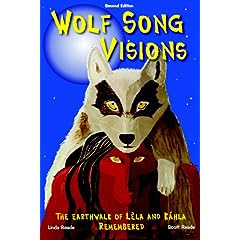 Linda and Scott Reade were drawn together because they both started having the same visions and dreams in the early 1990's.
The dreams were of Lela and Kahla, two Native Americans who loved each other about 400 years ago.
Scott dreamt of a large drum shaped rock......he had no idea where it was but he knew he had to find it, and in time he did, and realised that this was where Kahla's strong presence was.

The book starts with journal entries from both Scott and Linda on their journey to find Drum Rock, then the story starts of their lives long ago.

This account of how the Native Americans lived and hunted was very enthralling as I followed their rituals and learned of how they believed very much in destiny and how everyone and everything is connected. They led a simple, happy and peaceful existence, respecting nature.

It is also a moving love story of Lela and Kahla who were inseparable from the day of Lela's birth.

The book also contains prophesies that were told to Lela and Kahla, which the Authors say is the real purpose of this book.

I would recommend this for anyone interested in Native American traditions and rituals, but it is also a fascinating story on its own.