THE SPOOK'S APPRENTICE BY JOSEPH DELANEY 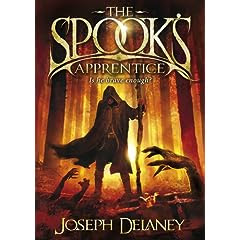 The Spook's Apprentice (Wardstone Chronicles) by Joseph Delaney (In America it is called The Last Apprentice: The Revenge of the Witch)

My eldest son was in Manchester (England) at the weekend and this book was being given out to passers-by so, of course, he brought it home for his mum! I've never heard of this happening before, just handing out copies of books. Is this a new marketing idea?

A wonderful and terrifying series by a new writer about a young boy training to be an exorcist. Thomas Ward is the seventh son of a seventh son and has been apprenticed to the local Spook. The job is hard, the Spook is distant and many apprentices have failed before Thomas. Somehow Thomas must learn how to exorcise ghosts, contain witches and bind boggarts. But when he is tricked into freeing Mother Malkin, the most evil witch in the County, the horror begins ...

This is the 1st of 6 books by Joseph Delaney, the publishers have just re-issued them all with new covers. The Wardstone Chronicles website is here.

Joseph Delaney was brought up in the same area of North West England as me and his books are partly inspired by the famous Pendle Witches from Pendle Hill in Lancashire - see the interesting Wikipedia article here. Pendle Hill is just a few miles from where I live.