BOOKS THAT CAME INTO MY HOUSE THIS WEEK

The postman brought me these books this week :

The Skinny On Time Management

The Skinny on Success

The Skinny on The Art of Persuasion

The Skinny on Networking
The people from the Skinny On series sent me these books for review, they contain stick figure drawings and simple stories that are quick and easy to read.
I also received this from Arcadia Books

What Will Survive by Joan Smith
It is the summer of 1997. Aisha Lincoln, supermodel-turned-charity-campaigner, sets out on her latest trip to the Middle East, with a famous photographer in tow. However, the assignment turns into tragedy when both are killed in an explosion in a remote area of Lebanon.

Aisha not only leaves behind a seemingly perfect marriage and two teenage sons, but also a secret lover, Stephen Massinger, who is a backbench MP with a reputation to protect, and a group of devoted friends and colleagues, all struggling to come to terms with the news.

As the bereaved negotiate their way through the media onslaught in the weeks after Aisha's death, her name jostling for column inches with the reports of Princess Diana's charity causes and holiday exploits, journalist Amanda Harrison travels to Lebanon to write an article about Aisha's last days.

However, as the events of August 1997 draw towards their inevitable close, Amanda discovers some disturbing facts about Aisha's death. It is only then she realises the extent of the power wielded by the media, and how, for them, there will always be some truths that are more important than others.
I also went to the library and brought this home with me : 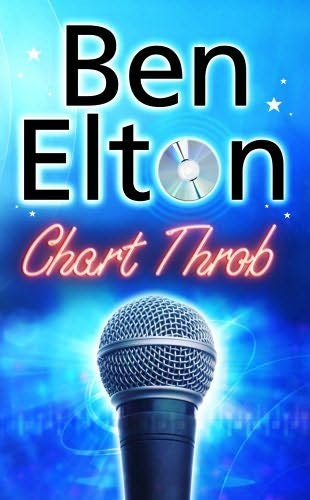 rChart Throb is the ultimate pop quest. There are ninety five thousand hopefuls, three judges, just one winner. And that's Calvin Simms, the genius behind the show. Calvin always wins because Calvin writes the rules. But this year, as he sits smugly in judgement upon the mingers, clingers and blingers whom he has pre-selected in his carefully scripted 'search' for a star, he has no idea that the rules are changing. The 'real' is about to be put back into 'reality' television and Calvin and his fellow judges (the nation's favourite mum and the other bloke) are about to become ex-factors themselves. Ben Elton, author of "Popcorn" and "Dead Famous" returns to blistering comic satire with a savagely hilarious deconstruction of the world of modern television talent shows. Chart Throb has one winner and a whole bunch of losers.