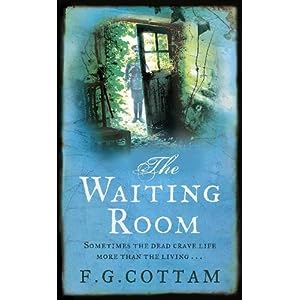 THE WAITING ROOM BY FG COTTAM

Martin Stride is a retired rock star, enjoying the quiet life with his young family on their beautiful estate. On the edge of his grounds lies a derelict Edwardian railway station waiting room once used to transport troops in The Great War. Silent for many years, lately strange occurrences in the waiting room lead Martin to seek the help of TV's favourite ghost-hunter Julian Creed. But Creed's psychic ability is a fabrication to gain viewers. He doesn't believe in the paranormal. Until he spends a night in The Waiting Room.
My Thoughts:
I picked this book up from the library as I was drawn to the cover picture of a ghostly spectre of an old soldier.
The story started really well and I was drawn in as Martin Stride's family experienced strange happenings centred on the waiting room which was about half a mile away from their house -- his son saw the soldier's apparition there, singing was heard of an old war-time song and the faint rumble of a train was heard, even though there were no tracks. All very scary.
Enter the enigmatic, laid-back, confident Julian Creed, TV ghost hunter, who's a complete fake, but who's job is "to discover what had summoned the waiting room back into baleful life and return it to rest." Not believing in ghosts he gets quite a shock when an apparition appears in front of him when he stays there for one night............
As he and his researcher try to discover more about the nearby now demolished asylum that was open in the 1920's they uncover terrible secrets from the past that could have an impact on the present and the future.
The story itself was atmospheric and chilling in parts but I felt that about three quarters of the way in it lost its way and I started feeling a little confused as to what was happening and why, and I thought there were too many questions that weren't answered satisfactorily for me. Also the dialogue was sometimes unreal and stilted.
Overall, a decent horror story but one that probably won't stay in my mind.