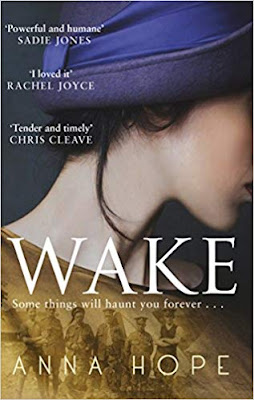 Set just after WWI, as Britain's Unknown Warrior is being brought home from France; three very different women try to find ways to live again after devastating losses -- of a son, a brother, a lover -- and their tragic connection is gradually revealed as the book unfolds.
First Paragraph:

Three soldiers emerge from their barracks in Arras, northern France.  A colonel, a sergeant and a private.  It is somewhere close to the middle of the night and bitterly cold.  The men make their way to a field ambulance parked next to the entrance gate: the colonel sits in the front with the sergeant, while the private climbs into the back.  The sergeant starts up the engine, and a sleepy sentry waves them out and on to the road beyond.

The backdrop to Anna Hope's impressive debut novel Wake is the journey home to Britain, over five days in November 1920, of an anonymous soldier killed in WWI with all the ceremony and dignity of a nation still recovering from the terrible conflict.

Interspersed with this are the lives of three women:  Hettie, Ada and Evelyn. They all lead very different lives but have all shared loss, hardship and suffering.

Over these five days we share in their memories of their loved ones, and how they are slowly changing as new people come into their lives and remind them that there can be hope for a better future, there can be happiness if you allow yourself to let go.

I thought it was very clever how Anna Hope connected all the women to each other without them realising it.

I found the story to be very moving in parts, very poignant, thought-provoking, beautifully written and with characters to empathise with.
Source:  I received an eBook copy via NetGalley.