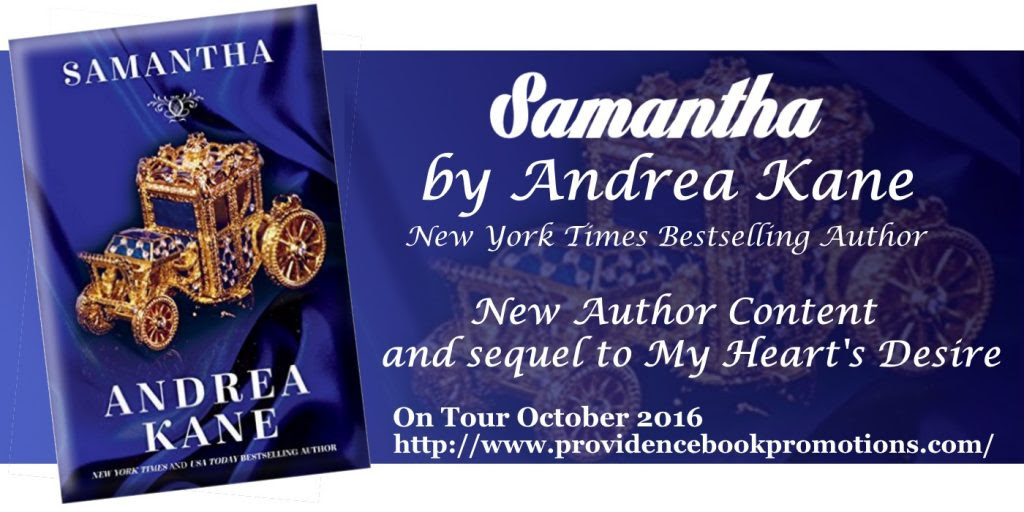 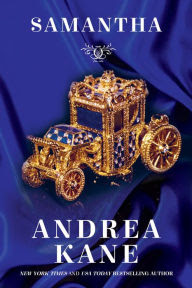 Don't Miss Your Chance to Read Samantha! You can purchase your own copy at Amazon, at Barnes & Noble, AND add it to your reading list on Goodreads!

Lady Samantha Barrett wondered if her imaginary hero would ever become real. Of course, he must be devastatingly handsome and just a bit dangerous. Now, her coach is filled with a collection of Gothic novels and her head with romantic notions as she eagerly leaves her brother’s country estate for her first London season. Still unsophisticated and too innocent by far, Samantha is ill-prepared for the hypocrisy of the ton or for the formidable stranger who crosses her path—a stranger she is sure must be the man of her dreams…

Remington Worth, the Earl of Gresham, is reputed to be anything but a hero. He is, however, intrigued by the fresh, young Lady Samantha. At sea, Remington had been a brilliant captain. To help save his country, he has accepted the Crown’s commission to become the most deadly and loyal covert agent, posing as a notorious womanizer and blackmailer. His latest mission is to investigate the mysterious disappearances of England’s prized merchant vessels. With an iron will, he will allow no one to get in his way or touch his heart—until Samantha.

In walked the man of her dreams.
Samantha stared, transfixed, as the vision stepped directly from the pages of her latest gothic romance into the noisy, smoke-filled tavern.
He had arrived... her long-awaited hero.
It mattered not that he was a total stranger to her... nor that he patronized so seedy an establishment as this... nor that he pointedly displayed an ominous-looking knife handle from the top of one muddied Hessian boot. All that mattered was his towering height, his thick black hair, his uncompromising jaw, his piercing gray eyes. And that dimple... it was just where she'd always known it would be; in his left cheek. It flashed briefly as he nodded a greeting to someone, then vanished into the taut lines of his face.
Yes, it was irrefutably he... the hero of all her fantasies.
Breathless and eager, Samantha watched as he carelessly swung off his great coat, shaking rivulets of rain from it with swift, purposeful strokes. Simultaneously, he surveyed the room, his cool gaze taking in the shoddy furnishings and seedy occupants in one enveloping glance.
He moved forward, commanding and sure, coming closer to where Sammy sat... close enough so she could see the drops of water glistening in his raven-black hair, causing the ends to curl a bit at the nape. He seemed to be looking for someone.
Instead, he found her.
Dark brows raised, not with instantaneous, adoring surrender, but with decided, disapproving surprise.
Without hesitating, Sammy flashed him a smile, drinking in his splendid, chiseled features and exciting, leashed power. He was just as she had imagined him... no, better.
Her heart tightened in her chest as he approached her.
"What despicable cad deserted you here, little one?"
"Pardon me?" Sammy blinked in confusion.
With apparent disgust, her hero scanned the room. "You needn't feel ashamed. Just tell me what unscrupulous blackguard accompanied you to such a place, then abandoned you."
"Oh, nothing like that, sir." Sammy assured him brightly. "Actually, it was I who spotted this establishment from my carriage window and chose to stop here. Given the circumstances, it seemed the best place..."
"The best place... to what?" He looked censuring now, his gray eyes chilling, stormier than the skies that heralded tonight's downpour. "Is this your idea of an evening adventure? If so, you've either lost your way or your mind! Tell me, have you looked about you? I seriously doubt that you have, else you would have bolted. And, thankfully, it seems that these low-lifes have yet to spot you as prey. Had they done so, I assure you that your elegant gown would have long since been tossed up over your foolish, beautiful head!"
Sammy sucked in her breath. This wasn't at all the way she'd envisioned their first meeting. Following her hero's icy, pointed gaze, she surveyed the dimly lit tavern, trying to see what was upsetting him so. True, the tables were a bit shabby, even broken in spots, and the pungent smell of gin... mixed with some other, unrecognizable foul odor... permeated the room. And, she had to admit, the occupants of the tavern did need to shave... as well as to bathe. Still, they'd shown no signs of harming or even approaching her; so why was her hero hinting at violence?
"I don't know what you mean, sir," she confessed, bewildered. "Despite their rather coarse attire and unpolished manners, the gentlemen here have made no improper advances toward me. They are merely enjoying their spirits and each other's company."
The stranger gaped in utter disbelief.
"Gentlemen?" he managed. Leaning forward, he lowered his voice to a muffled hiss. "Sheltered innocent, what you see are pickpockets, highwaymen and drunks... and an occasional murderer or two." He straightened, emphatic and fierce. "This is Boydry's... as unsavory a pub as they come... not the bloody Clarendon Hotel!"
"Really?" Samantha was finding it very difficult to share the intensity of his tirade. She was too busy drowning in the hypnotic spell of his towering presence. And, after all, he was only trying to protect her... the foremost duty of a true hero.
"If such is the case, then why are you here?" she asked, half-tempted to stroke the hard, uncompromising line of his jaw. "You don't appear unsavory to me."
His dimple flickered in response. "Don't I? That is only because you don't know me."
"No... but I'd like to."
He blinked. "You'd like to..."
"Oh yes. Don't you see?" Sammy leaned forward, making an animated sweep with her hands. "It's as if Mrs. Radcliffe had penned it; a young woman alone... darkness... danger." A pause. "Of course I would have preferred a castle turret to a tavern..." she gave a philosophical shrug, "... nevertheless, you've arrived... and you're exactly as I pictured you."
"You have lost your mind," he muttered. 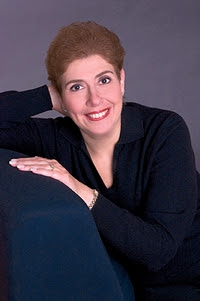 Andrea Kane is the New York Times and USA Today bestselling author of twenty-seven novels, including thirteen psychological thrillers and fourteen historical romantic suspense titles.
With her signature style, Kane creates unforgettable characters and confronts them with life-threatening danger. As a master of suspense, she weaves them into exciting, carefully-researched stories, pushing them to the edge—and keeping her readers up all night.
Kane’s beloved historical romantic suspense novels include My Heart’s Desire, Samantha, The Last Duke, and Wishes in the Wind.
With a worldwide following of passionate readers, her books have been published in more than twenty languages.
Kane lives in New Jersey with her husband and family. She’s an avid crossword puzzle solver and a diehard Yankees fan. Otherwise, she’s either writing or playing with her Pomeranian, Mischief, who does his best to keep her from writing.

Take a minute to stop by some of the other blogs in the tour! They have exciting features, reviews, and special giveaways!


Enter for a Chance to Win!

This is a rafflecopter giveaway hosted by Providence Book Promotions for Andrea Kane and Bonnie Meadow Publishing LLC. There will be 5 US winners of one (1) eBook copy of Samantha by Andrea Kane. The giveaway begins on September 28th and runs through November 3rd, 2016.