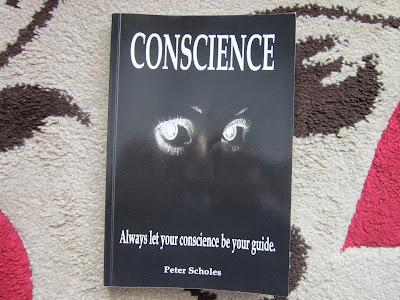 Conscience takes you on a journey through the thoughts of twenty very ordinary individuals – individuals just like you.

As we delve into the thoughts and actions of these people you cannot help but question yourself and imagine yourself in their position. How would you act? What would you think? A tragedy. A young girl has died. Was she killed or was she really saved?

An angry housewife, a disorientated groom, a distraught Mum, an impatient shopkeeper, a randy husband, a lazy but caring priest, a feisty invalid and a couple of bickering pensioners. These are just a few of the characters in this tight knit thriller that bring this intricate, roller coaster of a novel alive and keep you guessing until the very end.

'Conscience' is the story of how thoughts can trigger a chain of disturbing, funny and outrageous events. And when twenty very different people are involved the consequences are frightening. As we get to know the varied and complex characters, we are sucked into a tale of mishap, misunderstanding, malice and murder. Always let your conscience be your guide.


Twenty random voices and thoughts fill the pages of this entertaining and unusual story.

There is a brilliant mix of characters, from an ordinary street cleaner to a husband with a wandering eye, from a nervous rookie police officer to a grieving mother.  And all sorts of others in between.

The thoughts of these people began slowly as I started to get to know them, their quirky ways and cynical views of the world - many of their thoughts echoed my own - who hasn't looked in the next person's shopping basket while waiting in a supermarket queue and wondered about them and their lifestyle!

Some of the voices were loud, some quiet, some funny, some sad, some thoroughly dislikeable, some sympathetic but all quite different.  I liked that some were not very nice people, they weren't perfect, they had flaws, but they were just ordinary normal people like us, caught up in an extraordinary situation.

I felt it dragged too slowly about halfway through when nothing seemed to be happening and my attention wandered.  I feel it would benefit from moving along quicker at that point.

There is no narrative, the peoples' thoughts moved the story along, which I thought worked really well.  As the story gradually evolved , I did wonder where it was all going and when it would all start to make sense, and when it eventually did all come together it was in a quite unexpected direction.  And it was then that I found myself eagerly turning the pages.

Overall I enjoyed this unusual story and If you're looking for a read that's slightly different from the norm I would recommend Conscience.....it's all about intuition and knowing what is the right thing to do and it certainly makes you think and wonder whether you would do the same in those circumstances.

My thanks to author Peter Scholes for giving me the opportunity to read this interesting and unique story.  Follow him on Twitter @scholes_peter

You can buy Conscience at Amazon UK  -  Amazon US  -  BookDepository 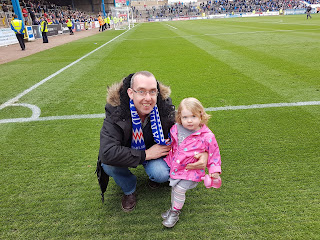 Peter has been a primary school teacher for over fifteen years. He has taught across the primary age range in schools in Bedfordshire, West Yorkshire and now in Accrington in Lancashire.

He has already written and developed the ‘Ultimate Packs’ (educational resource packs to support Literacy in primary schools) which sell through NES Arnold and Hope Education. The packs were nominated for the BERA awards for 2010. He also writes novels, plays, poetry and short stories.
Peter teamed up with close friend and fellow teacher, Darren Martin, to write the ‘Beyond the hill’ series of children’s books which are also available on Amazon and have been widely used in schools to help develop creative writing in Key Stage 2 and 3.

In his spare time, Peter is a passionate Cumbrian and an avid supporter of Carlisle United. Both he and his beautiful daughter, Jessica, are season ticket holders and blues through and through. He also loves to travel citing Rome, Seville and Singapore amongst his favourite destinations.


Peter is actively seeking an agent for his written work and dreams of being a TV comedy scriptwriter and famous novelist but for now, he has to settle for teaching 10 years old that a trip to Barnet away in February can be a life changing, exotic experience...probably.


Please enter via the Rafflecopter below
Giveaway ends on Sunday 21 May 2017 Midnight GMT
It is open worldwide
I will email the winner straight after the giveaway ends, if no reply within 5 days I will pick another winner