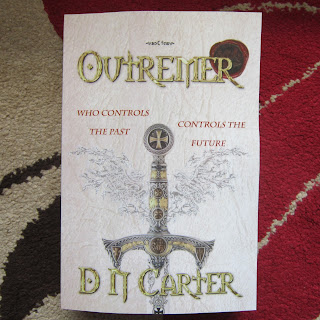 Outremer I
Who Controls The Past Controls The Future
An epic love story must overcome religious divide and a plot to eradicate two blood lines, as the Crusades and the search for the ancient mysteries of the Holy Grail gather momentum.
Raised by his father in La Rochelle, France, Paul Plantavalu is known for his artistic nature, inquisitive mind and Christian faith. He also has an unshakable love for his Muslim childhood friend, Alisha al Komaty. Courageous and outspoken, she returns Paul’s love. But their path is paved with obstacles; religion, war, political chaos and a mysterious enemy determined to destroy their family lines.
Sometime between 1110 AD and 1120 AD in the aftermath of the first crusade, a small band of nine knights — the founding knights Templar — recover ancient precious artefacts left by a former, advanced civilisation, beneath the City of Jerusalem. Ruthlessly guarded, the secrets revealed by this discovery are highly prized by powerful and dangerous forces far and wide; the repercussions of their capture are inextricably linked to Paul and Alisha. As Paul starts to experience dark and vivid dreams and the fragile balance of peace starts to crumble, it will fall to an enigmatic man known as Kratos and his female warrior protégée Abi Shadana, to safeguard Paul and Alisha.
Paul and Alisha’s love story weaves between the threads of our reality and other realms — from the Druids to the Sufi mystics, the Magi of the East, the secret political arm of the Knights Templar and the Isma’ilis, the Assassins. Knights and pilgrims alike will witness some of the darkest battles ever fought. The discovery of a unique sword’s lethal power and whispered connections to King Arthur and the Holy Grail lead Paul and Alisha to question if their lives ever be the same again.


The first of a four-part series, Outremer is an historical epic, which sweeps across England, Scotland and France, to Syria, Jerusalem and Egypt. Discover the truth — and crack the ancient code — behind the great mysteries of the High Middle Ages for yourself. 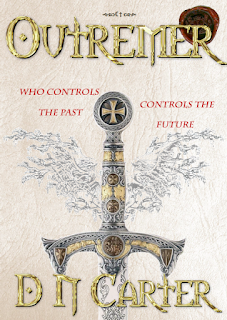 EXCERPT
La Rochelle in the main kitchen back at the Manor House, Paul’s brother Stewart and Alisha were sat at the dining table. Paul and Alisha had fallen out, Paul trying to keep his distance as advised and to not get involved with her. She had questioned his ability to look after her and called him a dreamer and still just a boy after he appeared to reject her.

First off I have to say that I consider myself to be a spiritual, not necessarily religious person for there is a massive difference. I have learnt and believe that religion is a vehicle that has been used to impart certain moral rules and guidelines, sadly often grossly misunderstood or interpreted, but also to carry intact, very real complex mathematical and harmonic codes, which to me at least clearly demonstrates there is a higher intelligence behind all of it. We are only now waking up to see those codes as our own scientific and technological knowledge grows; beforehand we could not recognise them for what they are.

I was lucky enough to have travelled quite extensively in my early formative years to places such as Cyprus, Egypt, Turkey, Syria, and Jordan as well as other countries around the world due to my father’s profession. The whole of the Middle East held a special place in my heart, but Cyprus, the island of love as it is known, certainly had a profound effect upon me where I lived for many years. I recall seeing smoke stacks on the far horizon across the Sea whilst high up in the Troodos Mountains and being shocked to learn they were in fact fires from conflict in the Lebanon because of differing religious views. I also experienced at first hand the fear and reality of terrorist bomb attacks by the IRA whilst living in Yorkshire when they bombed a camp I lived beside, and later when my friend’s father was blown up in Northern Ireland, fuelled my desire to learn and understand why people do such things. I am the first to admit I am a soft soul, too forgiving I am often told, but I do not see that as a failing. I am a hopeless romantic at heart too which probably explains my early interest in chivalric Knights on great quests rescuing fair maidens and princesses...in truth it is probably the princess who would end up rescuing me, for as I have learnt, women are actually the stronger sex. I was for a long time very naive to the realities of how people can treat others. I only ever saw the best in people. I still do for I refuse to become cynical, but the harsh realities of this world did and still do concern me...how could a God, if he really exists, allow or tolerate such cruelty and suffering? This led me to study as much as I could on all the major religions, including the not so well known philosophies.

It was whilst trying to get answers, and after being totally captivated by the Pyramids of Giza, I was further inspired to delve deeper into the mysteries that surrounded them. On a visit I was fortunate enough, when all the lights suddenly failed, to jump into the sarcophagus within the so-called Kings chamber. I knew at that moment as I lay motionless in total silence, other than a concerned Japanese lady getting slightly upset, that the Great Pyramid was no mere tomb...it was a deep absolute knowing that I could not rationalise at the time, but I became deeply fascinated by ancient myths, legends and Celtic folklore and it soon became even more apparent that both a mathematical and harmonic pattern, a code in fact, was common to all the major religions no matter how far they were separated by distance globally or time across the centuries. The codes were not just similar...they are exact! With an avid interest in astronomy too, which led to further connections being seen within ancient myths and legends and stellar alignments that went far beyond mere coincidence, I decided upon a full investigation, as well as visit all the main locations, now recounted within Outremer, from the Hill of Tara in Ireland, Glen Lyon of Scotland to the Pyramids at Giza and the deserts of Arabia; even Antarctica. Outremer has been forty years in the making and my interest in these matters led to a career in science and research. I am now in my fifties and presently spend my time living between France and England with my family, plus dog and some gold fish of course, but I continue in my travels researching and exploring; a path that shows no signs of slowing down and I shall continue for as long as I am able.


In what little spare time I do have, I paint and draw. My ‘normal’ work mainly revolves around ancient history, archaeology and scientific research so I don’t really consider it work at all is it is my passion. Now that Outremer is complete...all four volumes, I am already working upon a prequel and then a factual compendium to compliment the series. I run to keep fit...coughs...still enjoy parachuting when I get the opportunity and now the proud owner of a microlight.  But you can’t beat a good book and I will always put that up there as my favourite hobby...curled up somewhere quiet and warm, cup of tea to hand and music in the background. 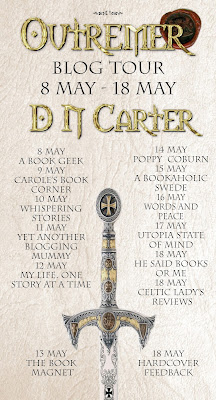