I'm thrilled to be part of the Blog Tour for Of Spice and Men with a review of this entertaining cozy mystery!  There's also a fantastic giveaway too!

Of Spice and Men: A Pancake House Mystery 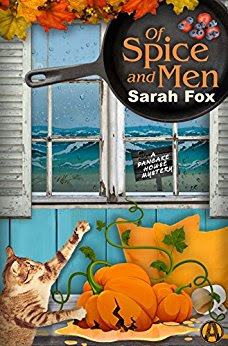 Of Spice and Men: A Pancake House Mystery

Lights. Camera. Murder? Wildwood Cove’s star turn is soured by a sneaky killer in this delicious cozy mystery from the USA Today bestselling author of The Crêpes of Wrath.

With a Hollywood film crew in town to shoot a remake of the horror classic The Perishing, the residents of Wildwood Cove are all abuzz. Even Marley McKinney, owner of The Flip Side Pancake House, can overlook the fact that the lead actress, Alyssa Jayde, happens to be an old flame of her boyfriend. After all, the crew loves Marley’s crêpes—so much so that Christine, the head makeup artist, invites her onset for a behind-the-scenes tour. But when Marley arrives, the special-effects trailer is on fire . . . with Christine inside.

The cops quickly rule Christine’s death a murder, and Alyssa a suspect. Marley’s boyfriend insists that the actress is innocent, but when Marley sticks her nose into the complicated lives of The Perishing’s cast and crew, she discovers more questions than answers. It seems that everyone has a hidden agenda—and a plausible motive. And as the horror spills over from the silver screen, Marley gets a funny feeling that she may be the killer’s next victim.

Sarah Fox’s addictive Pancake House Mysteries can be enjoyed together or à la carte:
THE CRÊPES OF WRATH

| FOR WHOM THE BREAD ROLLS

| OF SPICE AND MEN

Wildwood Cove, on the Olympic Peninsula sounds like such a beautiful and peaceful resort, full of old Victorian buildings, quaint shops like the Pancake House and a gorgeous long beach just made for taking leisurely strolls along. But murders keep happening there and luckily our amateur and nosey sleuth Marley McKinney is on hand once again to root out the killer.

The third in the series has a film crew visiting the Cove and Marley just happens to overhear threatening behaviour towards Christine, make up artist, who is later found murdered.

Of course she vows to find out who would do that and I just love how she goes about finding clues and talking to the cast and crew to discover any motives, jealousies and petty dislikes.

In this story, Marley also has a misunderstanding problem with her gorgeous boyfriend, while someone tries to scare her with a hideous film prop, but nothing deters her from her quest.

I really enjoyed this book, it's funny, entertaining, with lots of great characters, a great plot with twists and turns, and some yummy recipes at the end!

I can't wait for the next in the series. 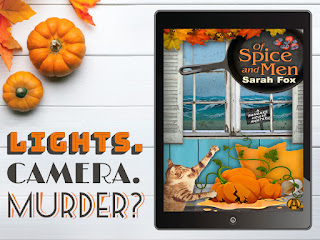 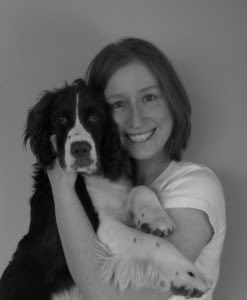 Sarah Fox was born and raised in Vancouver, British Columbia, where she developed a love for mysteries at a young age. When not writing novels or working as a legal writer, she is often reading her way through a stack of books or spending time outdoors with her English Springer Spaniel.

November 13 – A Chick Who Reads – REVIEW

November 16 – Reading Is My SuperPower – REVIEW

Have you signed up to be a Tour Host?