AFTER THE SNOW BY SUSANNAH CONSTANTINE Book Review (Historical Fiction) 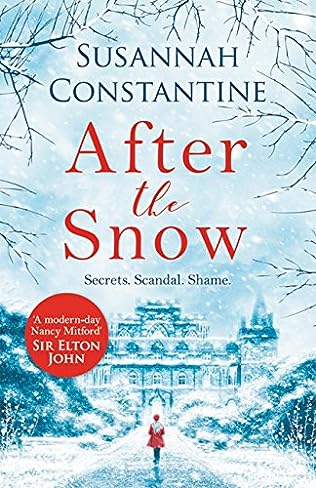 AFTER THE SNOW
BY
SUSANNAH CONSTANTINE

All eleven-year-old Esme Munroe wants for Christmas is for her mother to be on one of her ‘good’ days – and, secretly, for a velvet riding hat. So when she finds an assortment of wet towels and dirty plates in her stocking, she’s just relieved Father Christmas remembered to stop at The Lodge this year.
But later that day Esme’s mother disappears in the heavy snow. Even more mysteriously, only the Earl of Culcairn seems to know where she might have gone. Torn between protecting her mother and uncovering the secrets tumbling out of Culcairn Castle’s ornate closets, Esme realises that life will never be the same again after the snow…
Susannah Constantine provides a rare glimpse into the secret lives of the scandalous upper classes. Perfect for fans of Downton Abbey and The Crown

Set in 1969 this is a story of how the rich people live, we like to believe they're happy because they can buy anything they want, but here in this tale of the upper classes we realise that they're not so different from us in many ways.

As Esme wakes up on Christmas morning she is so excited to have her presents but the one thing she would love to have is a mother who doesn't suffer from depressive episodes.  This is one of the main themes throughout the story, Diana is kind and thoughtful when she is 'normal' but is unpredictable when feeling 'not herself'.

I was around Esme's age in 1969 so it was nice to be able to identify with her a little, though I didn't have a pony of my own or be invited up to the Castle to celebrate Christmas!  But she does love her mother very much and is anxious to please her, she also doesn't quite understand what's wrong with her.

The secrets alluded to on the cover were not difficult to guess early on, though there were one or two surprises later on.

The writing was very simple, easy to read and very descriptive.  But I did find it quite dull in places and I only kept reading in the hope that it would get more interesting but, unfortunately, it didn't.

If you disagree or hate fox hunting then this may not be the book for you.  I found it quite disturbing that two eleven year old girls went on the fox hunts and the pheasant shoots.

I also found it hard to believe that the man in charge of the stables could talk so harshly to the young girls, swearing and shouting at them, even when their parents were around.  That would never have happened on Downton Abbey!

I liked Esme and her best friend Lexi, they were so lovely and unspoilt, really good characters.

Overall, it was an okay story, but I don't think I'll read another by this author.

I received an ecopy of this book from Net Galley.