Book Review: Coming Up Next by Penny Smith 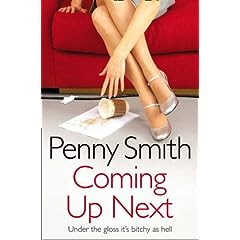 Synopsis:
A darkly comic novel about the fall and rise of a TV presenter. When Katie Fisher, morning TV presenter, returns from holiday it's to discover that she's been publicly sacked from her job as anchor of Hello Britain! and replaced by a pert young thing, she does what any self-respecting thirty something would in these circumstances -- she makes a dash for her parents and hits the bottle. But Katie, sooner or later, has to face the world, the photographers, and the backstage intrigue of morning television: the cut-throat, lecherous producers, the ambitious but vacant Keera, and Mike, her co-host, a trustworthy friend or just another one of the many back-stabbers? Humour is Katie's only weapon and, as things hit rock-bottom, it could provide a perfect solution to life after the sofa.

If you're looking for a story with a deep meaning where you'll expand your vocabulary and learning, then this is not the book for you.

But if you want a book to read on the beach or by the pool on holiday that doesn't stretch your mind then you could do a lot worse than pick this.

The story centres around Katie Fisher and the people, family and friends who surround her, many of whom are predictable 3d characters who are instantly forgettable. There are some quite funny quotes in the book, most of which are too rude to print here! There is lots of back-stabbing and the story is somewhat predictable but that's not always a bad thing.

Katie Fisher was a likeable character and I felt a little sympathy for her predicament, so I did find myself hoping that her circumstances would change for the better.

My overall thoughts are that it's a fairly enjoyable, easy to read story that doesn't pretend to be something that it's not.

First Line: In hindsight, the holiday had probably not been a good idea.

What I Liked About It: Easy to follow plotline.

What I Didn't Like: Too many characters! I just couldn't remember who they all were, I actually had to write down their names/jobs so that I didn't get confused.