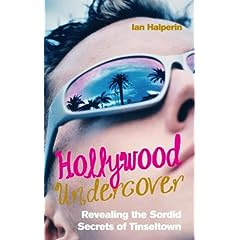 
My Synopsis:
Ian Halperin is commisioned to film a documentary by Canadian TV about aspiring Canadian actors trying to make it in Hollywood. But while interviewing many luckless actors he realises how cliched it all is, so he decides to do something different - he will go undercover as a gay actor called 'His Highness Halperin, the King of the Jews', and try to make it into the movies himself. Some of his adventures include a poker game with the 'Queers of the Round Table', a short affair with the ill-fated Anna Nicole Smith, hearing sordid secrets of the stars, a course at the Scientology Church where they attempt to turn gays straight, and many more.

My Thoughts:
I'm not really sure why I picked up this library book as it is definitely not my usual genre, but I thought I'd try something different.

Ian Halperin comes across as a likeable enough person though a little egocentric. I thought there were too many coincidencs, for instance, he met so many Hollywood stars who wanted to tell him all their secrets. This is a typical passage from the book where he's at a party and meets the 50's starlet Debbie Reynolds who starred in Singin' in the Rain -

'Every man I ever dated in Hollywood turned out to be gay', she revealed. She had actually famously been married to Eddie Fisher - father of her daughter Carrie, aka Princess Leia - whom she stole away from her old friend Elizabeth Taylor, causing one of Hollywood's all-time greatest scandals. I didn't have the guts to ask her if that applied to Fisher as well.

Also, all the people he met who were working in Hollywood were only too happy to start telling him secrets about this or about that actor (no names were mentioned in the book, unless they were deceased), who was gay, took drugs, had an affair with them, etc etc. Even one elderly woman walked up to him one day and told him all about her affair with Charlie Chaplin. I felt it was maybe a bit too exaggerated.

Maybe I'm doubting Ian Halperin too much, I don't know, it was just the way I felt. Another story that I found hard to swallow was the story from when he lived in London in the 1980's, he had been busking and was sitting on a bench when an elderly lady came by and started talking to him. It turned out that she was Ava Gardner, and he was invited to her apartment where she proceeded to tell him stories about Frank Sinatra. Again, it just seemed too unbelievable.

Here's another couple of excerpts regarding George Clooney -

"The one celeb I seemed to keep bumping into, no matter where I went, was Clooney, who appeared to be omnipresent. I had first encountered George outside the Formosa Cafe on Santa Monica Boulevard back in 1998. He looked fit, was wearing Converse running shoes and was with two gorgous model-types. He was in a great mood.
'George, I like your Chuck Taylors,' I said. 'I guess it gets the women.'
'Probably does,' he responded. 'I thought it was my hair, but you have made me re-think.'

The next time I bumped into him I was back in Montreal and he was directing and shooting Confessions of a Dangerous Mind. I saw him several times that summer - at a health club, at a bar, at a coffee shop and walking downtown. Everywhere I went George seemed to be there. I started to wonder if we were stalking each other."


But, having said all this, I did enjoy the book, it was well-written, fast flowing and kept my interest throughout, it was never boring. It is a book for people who enjoy magazines like Heat with lots of gossip. There was so much name-dropping involved!

There were some colour photos in the middle of the book corroborating some of his stories and there were also links on You Tube as well.

Ian Halperin has written several other 'celeb' books including -

Love and Death: A New and Explosive Investigation into the Murder of Kurt Cobain 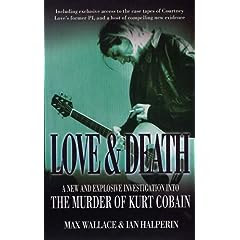 Bad and Beautiful: Inside the Dazzling and Deadly World of Supermodels