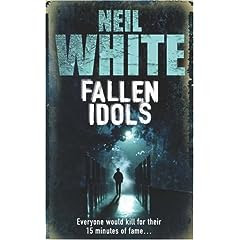 A Premiership footballer is murdered on a busy London street, and a country is gripped by terror. Who lies behind this apparently motiveless killing - and who's next?
Crime-beat reporter Jack Garrett is convinced that this is no celebrity stalker. Aided by DC Laura McGanity, desperately trying to juggle police life with motherhood, the trail leads them to Turners Fold, Lancashire - Jack's home town.
What's the connection between the recent assassination and the murder of a young girl there ten years before? Could it be that people are not all they seem - and will do anything for their fifteen minutes of fame?


This was Neil White's debut novel and it is the best crime fiction I've read this year.


From the first page to the last I was swept along on a rollercoaster ride of twists and turns, with the odd red herring here and there for good measure. We were introduced to freelance journalist Jack Garrett who I liked straight away, and his 'girlfriend' DC Laura McGanity, who I felt wasn't very developed as a character throughout the novel, maybe in subsequent stories we learn more about her.

"She closed her eyes and prayed as she listened to the rifle being assembled, the soft clicks joined by Ben's deep breaths and the chatter and movement of Old Compton Street, the soundtrack to a glorious afternoon in Soho".

It really was a book that I just couldn't put down, every few pages was a cliffhanger, and just when I thought Neil White was taking the story one way he turns and takes it in a completely different direction.

He has been compared to crime writers such as Mark Billingham which is high praise indeed. If you're looking for someone new I would definitely recommend him, I don't think you will be disappointed.


I'm looking forward to hearing him talk when he appears at our local Library next month.