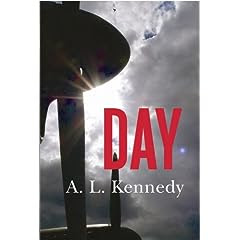 Synopsis:
Alfred Day wanted his war. In its turmoil he found his proper purpose as the tail-gunner in a Lancaster bomber; he found the wild, dark fellowship of his crew, and - most extraordinary of all - he found Joyce, a woman to love. But that's all gone now - the war took it away. Maybe it took him, too. Before Hitler and the bombs he was a boy in Staffordshire, helpless to defend his mother, to resist his abusive father. The RAF gave him order, skills, another family and a way to be a man. It taught him how to burn through lifetimes on night ops and brief, sweet leaves, surviving the unsurvivable. But it didn't prepare him for capture, for the prison camp and the chaos as the war wound down. It didn't prepare him for an empty peace. Now it's 1949 and Alfred is doing the impossible again, winding back time to see where he lost himself. He has taken the role of an extra in a Pow film. Shipped out to Germany and an ersatz camp, he picks his way through the cliches that will become all that's left of his war and begins to do what he's never dared - to remember. He is looking for some semblance of hope: trying to move forward by going back.


Unfortunately, I just couldn't finish it. I found the writing difficult to understand and confusing. I got to about page 40 and I really didn't want to carry on. I have too many other books to read to waste time on one that wasn't making any sense and that I just wasn't enjoying reading.

A.L. Kennedy's story goes backwards and forwards in time and the words did not have any structure, they were random words in paragraphs.

Sorry, but it just wasn't for me.