Book Review: The Perfect Summer: Dancing into Shadow in 1911 by Juliet Nicolson 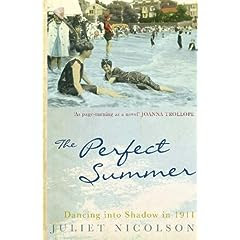 On the first day of May 1911 temperatures throughout England began to rise, and everyone agreed that the world was becoming exceedingly beautiful.

This is an absolutely absorbing look at the England of yesteryear, we see how life was changing especially for the under-class in society, they were beginning to question their role and the rules they were governed by.

Juliet Nicolson's detailed research could not be faulted and at the end of it I almost felt as if I had lived through the heatwave. I loved so many of the fascinating facts she gave us. Thinking about the present furore over many UK MP's expenses claims I found this nugget -

The proposed salary of £400 a year for Members of Parliament was not scheduled to come into effect until August: traditionally, MP's had funded themselves, from a private income or earnings outside the House of Commons.

How times have changed!!

Another entertaining fact regarding the rise of the picture-houses -

Some cinemas had tea-houses, and special sitting-out rooms reserved for ladies only. A reassuring manager in a tailcoat - like a maitre d'hotel in a restaurant or a butler opening a front door - would greet the audience as they arrived.

What a wonderful picture she painted of the everyday lives and loves of so many people, of their struggles just to survive in contrast to the upper-classes bored lives filled with playing bridge and partying.

My only criticism with The Perfect Summer is of the very lengthy paragraphs, some were almost a page long, of which many could have been edited better to make it easier to read.

However, if, like me, you love reading about the Edwardian way of life and can't resist enlightening anyone within listening distance of your amazing historical knowhow, you're going to want to add this to your collection!