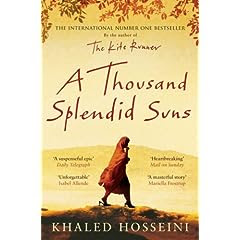 
Synopsis from Amazon:
Mariam is only fifteen when she is sent to Kabul to marry Rasheed. Nearly two decades later, a friendship grows between Mariam and a local teenager, Laila, as strong as the ties between mother and daughter. When the Taliban take over, life becomes a desperate struggle against starvation, brutality and fear. Yet love can move a person to act in unexpected ways, and lead them to overcome the most daunting obstacles with a startling heroism.

Mariam was five years old the first time she heard the word harami.

I loved the character of Mariam right from the beginning as she spends every Thursday waiting anxiously for her father to visit her. He already had 3 wives and Mariam was born out of wedlock. It was interesting and upsetting watching her grow up and begin a new life in which she had very few choices and nothing much to look forward to until the 15 year old Laila enters her life.

It was this relationship that was very moving. At first Mariam disliked and distrusted the young girl but gradually they began to depend on each other for moral support and a common enemy.

I found it so frustrating how the women were treated by the Taliban and couldn't help thinking throughout the book about the comparisons between their lives and mine. I think this paragraph (page 103) sums it up very well:

Mariam lay on the couch, hands tucked between her knees, watched the whirlpool of snow twisting and spinning outside the window. She remembered Nana saying once that each snowflake was a sigh heaved by an aggrieved woman somewhere in the world. That all the sighs drifted up the sky, gathered into clouds, then broke into tiny pieces that fell silently on the people below.
As a reminder of how women like us suffer, she'd said. How quietly we endure all that falls upon us.

This is not only a moving story but it's a history lesson and a reminder of how lucky I am to live in a country where women have as many opportunities as men and are listened to and respected as equals.

The title of A Thousand Splendid Suns (as explained on page 221) is taken from a poem written in the 17th Century, two of the lines are:

'One could not count the moons that shimmer on her roofs,
Or the thousand splendid suns that hide behind her walls.'

If you're interested in learning more of Afghanistan from 1959 until 2003 then this is a book I would certainly recommend.

The Hosseinis sought and were granted political asylum in the United States. In September of 1980, Hosseini’s family moved to San Jose, California.
While in medical practice, Hosseini began writing his first novel, The Kite Runner, in March of 2001. In 2003, The Kite Runner, was published and has since become an international bestseller, published in 38 countries. In 2006 he was named a goodwill envoy to UNHCR, the United Nations Refugee Agency. His second novel, A Thousand Splendid Suns was published in May of 2007. He lives in northern California with his family.

A film version of A Thousand Splendid Suns is being adapted to the screen by Steve Zaillian, the brilliant screenwriter behind Schindler’s List and Searching for Bobby Fisher. The film will be produced at Sony/Columbia by Producer Scott Rudin, who just won an Oscar for No Country For Old Men.