Book Review: This Time of Dying by Reina James 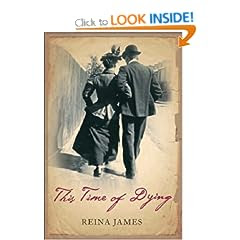 Synopsis:
It is October 1918, and England is gathering its dead. For Henry Speake, of Speake & Son Undertakers, laying to rest the shattered bodies of young men sent home from the front has become a grimly familiar duty. But then a country already reeling from war faces an unexpected shock: an epidemic. The Spanish influenza will kill more people than World War I. There is no cure, no help from the government, not even a clear sense of what is happening.
Henry sees the dangers much sooner than most, especially when he finds a letter left behind by a dying doctor, who begs health officials to start closing ports and setting up quarantines before it is too late. Unable to get a government minister to listen to him, Henry turns to a local schoolteacher, Allen Thompson, a woman who would usually be above his station.........


Monday, 14 October 1918
Thomas Wey got dressed very slowly, feeling for his buttons and doing them up without looking down at his shirtfront.

I'm not really sure why this book appealed to me, perhaps it was because of the time period, perhaps it was the cover. Well, whatever it was I'm very pleased that it did. It was a thoroughly engrossing and informative read, if somewhat ghoulish in parts. It covers 3 weeks in the winter of 1918 and it was interesting to note how people were kept in the dark about the epidemic.

I asked him if he'd ever thought about where a person is, in the body. He didn't even look up. 'I'd get on with your work, if I were you,' he said. And that's where we left it. But I still think there's a lot to find out. Say a good man comes back with a head wound. He might have been the best husband, the best father, then suddenly he's smashing out at them all, cursing and kicking. Is the damage to his head taking over his soul? Has the good man disappeared or is he cornered somewhere else, inside himself? And will God judge him on who he really is or on who he became because of a piece of shrapnel?

Even though I didn't like either of the main characters - middle-aged, grumpy, dull, Henry the Undertaker who loves playing his piano, and lonely, indecisive Mrs Allen Thompson the Teacher, I was always hoping that their friendship would turn to a romance by the end of the book.


This is not a book for the squeamish, as you can imagine there are plenty of deaths, sometimes whole families, but it was a fascinating account of how people coped while WWI was coming to an end, how they survived and carried on.

To read more about the 1918 flu epidemic click here.
Extras:


This Time of Dying was Reina James debut novel (incidentally, she is the daughter of Sid James, the comedy actor from the wonderful Carry On films). Her second novel The Old Joke (2009) is now available.


Do you think that death is too morbid a subject to read about?
Have you heard of the flu epidemic of 1918/1919?