Mina Scarletti, writer of horror stories but supernatural sceptic at heart, is becoming well known for unmasking those who fraudulently claim to be able to communicate with the dead. So it is no surprise to her when a young couple write to her seeking her advice.
They are George Fernwood and Mary Clifton, betrothed distant cousins with a family secret that is preventing them from getting married. Twenty years ago their alcoholic grandfather died in his bed. Though the official verdict was accidental poisoning rumours have been circulating that someone in the family murdered him.
If the murderer is one of their relations George and Mary are afraid they might pass on the deadly family taint to their children. Desperate to find out the truth, they have decided to seek out a medium to communicate with their dead relation on their behalf, and they want Mina to help them find one who is genuine.
Though she is not a believer in ghosts, Mina is intrigued by the family mystery and decides to help them in any way she can. Could one of the new mediums advertising in Brighton really be genuine? Will they help George and Mary find the answers they are looking for?
Soon Mina finds herself caught up in a web of deception and intrigue that leads to one of her most fascinating discoveries yet …

An Unquiet Ghost is the third cosy mystery in Linda Stratmann’s intriguing historical series, the Mina Scarletti Mysteries, set in Victorian Brighton. It can be read as part of this fascinating series or as a standalone novel. 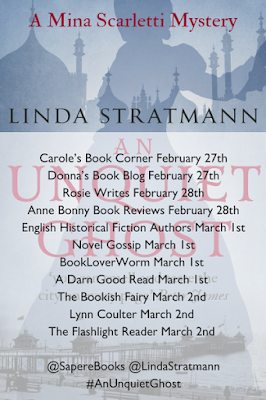 Thomas Fernwood was dying, and it was not the death he had been expecting. A man should die aged, peaceful, content, surrounded by his loving family, his soul slipping away sweetly from the prison of the flesh to join his ancestors in a higher, better place. At fifty-eight he had prided himself on his heartiness and vigour and thought he had many more years to enjoy, but it was not to be. Something deadly was tearing at his insides, eating him away. It was as if hot irons had been thrust down his throat deep into his stomach, and his bowels were molten. For hours he had retched in agony bringing up nothing but searing acid, a river of pain. Now, weak as a child, he was unable even to rise from his bed.
A face hovered above him, grim and anxious, and he recognised with some relief the heavy jowls and grey side whiskers of his physician, Dr Sperley. Thomas struggled through cracked lips to say what he feared might be his final message, but his throat was burned raw, and the words would not come.
‘Don’t try to speak,’ said Sperley, gruffly. ‘I know you’ve taken poison. I’ve done all I can.’
Only the desperation of the dying could force the mouth to move and what emerged was the merest whisper. ‘Mur ... der ...’ then Thomas coughed and retched again, a sour dry straining, so fierce he thought his ribs would break. His body had almost nothing left to reject. He felt a cool damp cloth pressed to his forehead, a little water wetting his parched lips. Finally, the spasm passed. Sperley’s face loomed closer, furrowed with concern. ‘Do you know who has done this? Nod your head if you do.’
The stricken man groaned deeply and nodded. Slowly, a hand that had been clutching the coverlet, opened, and one trembling finger moved on its surface as if he was trying to spell out a word. Sperley understood. ‘I’ll fetch pencil and paper.’ The doctor turned to go, but in that moment Thomas’s mouth suddenly bubbled with green bile and he started to choke, his body racked with convulsions so violent that he was almost thrown to the floor, and Sperley had to return and steady him, hold him to the bed by main force. Thomas gasped for air, his chest pumping rapidly, eyes wild with panic, but he gasped in vain. There was anger, frustration, despair, sorrow, acceptance, and finally a blinding light that faded away to nothing.


I hope you enjoyed reading this little snippet from the book - I will be reviewing it in March - please come back then and read my thoughts! 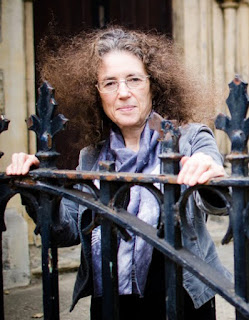 Linda’s love affair with the printed word started when she was two, when her mother, a keen reader, taught her the alphabet. She has had her nose in a book ever since. By her teens, she had developed an absorbing and enduring interest in true crime and history and a special fascination for the Victorian era.
2003 saw the launch of her first published book, Chloroform: the Quest for Oblivion. Several true crime books were to follow, most recently The Secret Poisoner, a study of nineteenth century poison murder, and three biographies, including The Marquess of Queensberry: Wilde’s Nemesis.
Linda’s first fiction series, the Frances Doughty Mysteries set in 1880s Bayswater, features a clever and determined lady detective. Through her adventures, Linda explores aspects of Victorian life such as diet, education, medicine, women’s rights, fear of premature burial and the fashion for cycling.
In her second series, set in 1870s Brighton, Mina Scarletti is a deceptively diminutive lady who writes horror stories and exposes the activities of fraudulent spirit mediums.
Linda is delighted to be an active member of the Crime Writers’ Association, and was elected Vice-Chair in 2017.