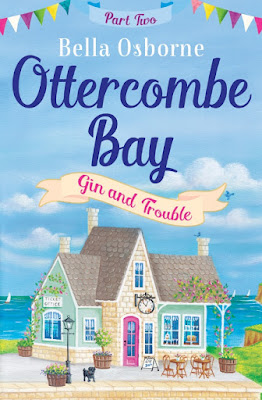 Today it's my turn on the Ottercombe Bay Gin and Trouble blog tour and I have an exclusive extract coming up!


Escape to the Devon coast, with Part Two of a brand-new four-part serial from the author of Willow Cottage.

Daisy Wickens has returned to Ottercombe Bay, the picturesque Devon town where her mother died when she was a girl. She plans to leave as soon as her great uncle’s funeral is over, but Great Uncle Reg had other ideas. He’s left Daisy a significant inheritance – an old building in a state of disrepair, which could offer exciting possibilities, but to get it she must stay in Ottercombe Bay for twelve whole months.

With the help of a cast of quirky locals, a few gin cocktails and a black pug with plenty of attitude, Daisy might just turn this into something special. But can she ever hope to be happy among the ghosts of her past? 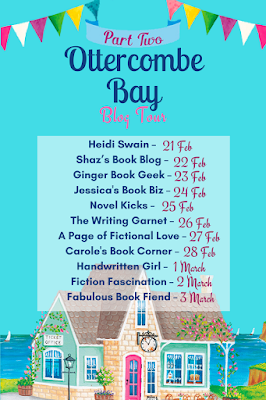 Daisy sat on the headland, her face pointed out to sea but she wasn’t really looking at the view and she certainly wasn’t seeing anything. Her hand was resting near her throat where her mother’s locket used to sit. Her aunt had offered her one of her necklaces to wear but it wasn’t just the feel of the jewellery against her skin she was missing. She missed the connection she felt to her mother, the reassurance she had when she touched it. She knew people wouldn’t understand. It wasn’t a lucky talisman: to Daisy it was her connection with the past.
Losing the locket had given her a renewed desire to know more about her mother’s death, but she didn’t know where to start on a case the police closed eighteen years ago. She wished she’d done more investigating when she still had the locket – she was convinced it held the key.
She lay back on the grass, the sun warming her skin, and stared up at the wispy clouds drifting aimlessly above her. She watched the shapes slowly change. She remembered lying in the exact same place trying to see pictures in the clouds as a child – at moments like this it didn’t feel that long ago. She wondered how different her life would be if her mother hadn’t died. It was likely they would all still be living in Ottercombe Bay and she would never have travelled further than Exeter … or maybe she was doing her parents a disservice; perhaps as a strong unit of three they would have seen the world together – she couldn’t be sure.
She knew if she wanted to search deeper into her mother’s death she probably needed to call her father but that was always a difficult subject to broach with him. It would need careful planning, rather than rushing in – something she was famous for. She puffed out a breath. She had come up here to calm down and it had worked.


The row with Max in the pub had escalated quickly. Now she was thinking more rationally she knew some of what he had said was right, even if she hadn’t wanted to hear it. Great Uncle Reg had always looked out for Daisy, so she knew he only had good intentions when he had left her the old railway building and his forcing her to stay in Ottercombe Bay in order to inherit it was his attempt to get her to put down some roots. But when you had been nomadic for such a long time, it wasn’t that simple.