Book Review: THE EXECUTION OF JUSTICE BY MICHAEL PHELPS 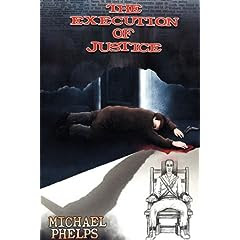 
Mike Walsh is promoted to Detective in the elite Robbery-Homicide Division of the Indianapolis Police Department which means more money but also more and longer hours. As he and his partner, Jack, get more and more involved in solving several armed robberies and serial killer cases, his marriage is under strain........and when the pressure mounts something has to give.

Michael Phelps debut novel is full of police procedures which he seems to know quite well, but my main problem was that everyone was so nice! Even some of the bad guys. It was just too unrealistic to believe that no-one had any flaws or had anything bad to say about anyone else, and nobody argued, they just seemed to agree with everyone, there was no shouting.

Also, there was too much trivia, I knew every breakfast and dinner meal that Mike and his wife ate, every item of clothing that Mike wore, the exact time he got up, what they watched on TV every evening and what time they went to bed. Too much information! It just clogged up the book and was quite boring to read.

So, while this was not a page turner of a book it did have plenty of good points. I liked the storyline overall, the gradual build up to the search for the armed robbers was quite exciting, it was certainly easy to follow what was happening, no complicated plotline here. As the characters were so well described I felt like I knew them and I was sad when Mike's marriage was in trouble. This is a good crime fiction detective story by someone who knows what he's talking about!

Michael Phelps website (which I think gives far too much of the plot away) informs us that this is the 1st in the Detective Mike Walsh series and another book is in the pipeline.

Special Thanks to Michael Phelps for sending me a copy of the book to review.