Book Review: The Glassblower of Murano by Marina Fiorato 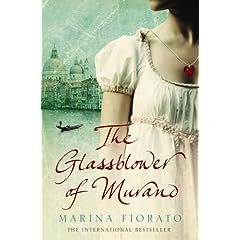 As Corradino Manin looked on the lights of San Marco for the last time, Venice from the lagoon seemed to him a golden constellation in the dark blue velvet dusk. How many of those windowpanes, that adorned his city like costly gems, had he made with his own hands? Now they were stars lit to guide him at the end of the journey of his life. Guide him home at last.

Of all the Glassbowers in Murano in the mid 17th Century, Corradino Manin was the best and most famous. His name was legendary. Down the centuries his ancestor Leonora Manin, living in London, whose marriage had just ended, has decided to make a new beginning in the city of her birth, Venice. It is then that she discovers the age-old rivalries that have been hidden for so many years and which have far-reaching effects on her new life.

Marina Fiorato's knowledge and love of Venice shines through on every page, as this tale of past treachery and jealousy slowly unfolds and the vivid descriptions of the Glassblowers art were a fascinating look at a dying tradition.

The only negative comment I have is regarding the love interest, Alessandro. I never felt that I knew him or what he was thinking, and the relationship between them seemed very contrived.

However, this doesn't really detract from the story as I found myself thoroughly engrossed in this mystery and Venice is now on my list of must-see places!