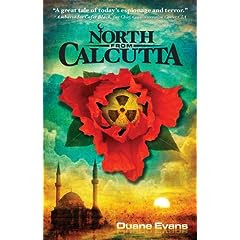 In a gripping story torn from today's headlines, Tarek Durrani, a westernised Pakistani intelligence officer races to stop an attack against India by a Kashmiri terrorist group. A successful attack could mean war between India and Pakistan, with possible nuclear ramifications. Of more immediate concern to Tarek, the attack also will take the life of Sahar, the seductive Indian architect, who has cracked the combination to his soul.

Duane Evans is an ex CIA Officer turned author and this is his debut novel.

This book took me completely by surprise in that what I was expecting it to be turned out to be totally different. I thought it would be a macho book, with plenty of bad language, have an extremely complicated plot, torture scenes with gory details, etc. but it contained none of those which was possibly one of the reasons why I enjoyed it so much.

I thought the slow and steady build up was compelling throughout (the explanation at the beginning regarding the situation with Kashmir was a nice touch as the reader doesn't always know everything and I found it invaluable to refer back to while reading the book).

The writing flowed easily and the main character, Tarek Durrani, the Pakistani Intelligence Officer, was both believable and very likeable. His love for the beautiful Indian Sahar gave him an extra reason for trying to stop the attack.

Ambassador Salim watched Tarek's arrival and took advantage of his momentary distraction to take his first hard look at this man on whom so much would depend. As Tarek's gaze swung round to meet his own, a slight smile came to Salim's lips. Yes, he knew in an instant, Major Durrani was the man for the job.

This is a thrilling action tale (with a little romance) that I wouldn't hesitate to recommend.