BOOK NEWS: Kindle readers can now borrow ebooks from libraries in the US 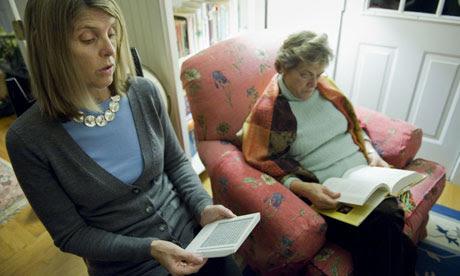 Kindle users in the US, like these Massachusetts book club members, can now borrow ebooks from public libraries. Photograph: Mary Knox Merrill/Getty
Scribbling in the margins of library books will soon be permitted, after Amazon.com announced yesterday that it would allow Kindle users to borrow ebooks from more than 11,000 American libraries.
The deal follows similar agreements from the Kindle's rivals, the Sony Reader and Barnes & Noble's Nook, and will enable Kindle users to check out and read ebooks from their local libraries. "We're doing a little something extra here," said Jay Marine, director of Amazon Kindle. "Normally, making margin notes in library books is a big no-no. But we're extending our Whispersync technology so that you can highlight and add margin notes to Kindle books you check out from your local library. Your notes will not show up when the next patron checks out the book. But if you check out the book again, or subsequently buy it, your notes will be there just as you left them."
The move was welcomed by American librarians. "Anyone who works with the public has encountered the discouragement people feel when you have to tell them that Amazon does not allow library ebooks on the Kindle," blogged librarian Bobbi L Newman, a manager at the Richland County Public Library in Columbia SC. "It's SO exciting to see that Kindle users will now have access to library ebooks (especially when we know that library books usage actually drives sales up). Plus that note-taking ability they mentioned is a big reason I bought my Kindle! Very excited to see it on library books."
Roberta A Stevens, the president of the American Library Association,told the New York Times that Amazon's move into library lending was "all but inevitable". "I can't say that I'm surprised," she said. "They were just shutting off a whole part of the marketplace. It's just logical that this would happen."
A recent report from the American Library Association revealed research showing that 72% of public libraries offer ebooks and 5% of American adults own an ebook reader. The ALA said that ebooks account for only a small percentage of borrowed items from most libraries, but they are the fastest-growing segment: the Chicago Public Library, it said, doubled its circulation of ebooks from 17,000 in 2009 to more than 36,000 in 2010.
Librarians are currently grappling with an announcement last month from HarperCollins stating that the publisher will not allow any single copy of one of its ebooks to be checked out from a library more than 26 times. The ALA said that librarians fear other publishers could adopt a similar model. "When we purchase a print copy, we get to keep it for as long as we want," said Audra Caplan, president of the Public Library Association. "It may eventually wear out or not circulate, but that's our choice."
The Kindle Library Lending programme launches later this year, but Amazon.com did not give a precise date.
Taken from guardian.co.uk