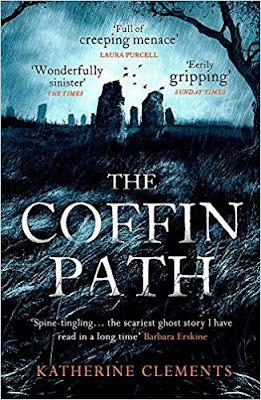 THE COFFIN PATH
BY
KATHERINE CLEMENTS


Maybe you've heard tales about Scarcross Hall, the house on the old coffin path that winds from village to moor top. They say there's something up here, something evil.
Mercy Booth isn't afraid. The moors and Scarcross are her home and lifeblood. But, beneath her certainty, small things are beginning to trouble her. Three ancient coins missing from her father's study, the shadowy figure out by the gatepost, an unshakeable sense that someone is watching.
When a stranger appears seeking work, Mercy reluctantly takes him in. As their stories entwine, this man will change everything. She just can't see it yet.

I finished reading The Coffin Path a couple of days ago but the characters and the events are still on my mind.  Certain moments keep coming back to me and I can't stop thinking about them.
Set in 1674 the story takes place over that year as Mercy toils in the fields, her father no longer has the strength for shepherding work, so when a stranger suddenly appears looking for work she's glad of an extra hand.
But odd happenings start to occur, and Mercy starts feeling uneasy for the first time in her life.
This was a God-fearing time, when folks were terrified of the Devil, believing everything the Preacher says, when rumour and "gossip spreads faster than the plague" in a small village, and accusations can ruin reputations.
The bleak and wild Yorkshire moors are so vivid, my imagination was alive with the harsh conditions that Mercy and the shepherds had to struggle against, the daily hardships of fatigue, hunger, battling the elements.  It was all so wonderfully described, along with the chilling events, and the sense of foreboding that I felt throughout.
The Coffin Path is one very scary story, the writing was so very atmospheric, the brooding moors, with the tension ramping up gradually.  An unforgettable read that was hard to put down.
If you're looking for a book that chills you to the core, then pick this up!
My thanks to Headline for giving me the opportunity to read this book in exchange for an honest review.

Also, check out my review of Katherine Clements earlier book set during the English Civil War - The Crimson Ribbon 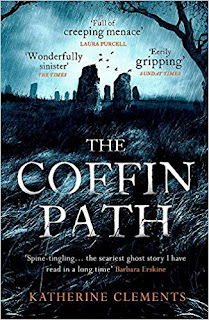